-WEST HARTFORD – For the past year, the Beth El Temple education committee has been redesigning the religious school curriculum, using a 2009 report by Rabbi Jack Wertheimer, professor of American Jewish history at the Jewish Theological Seminary in New York. “Schools That Work: What We Can Learn from Good Jewish Supplementary Schools” was published by the Avi Chai Foundation, a private organization that works to strengthen Jewish tradition and literacy.

The committee’s strategic planning process has been led by Dr. Sandy Dashefsky, La’atid consultant at the Commission on Jewish Education & Leadership (CJEL) of the Jewish Federation of Greater Hartford, and CJEL consultants Dr. Lois Koteen and Dr. Regina Miller. Dashefsky had been involved as a consultant to Beth El in 2000 and was asked to help the congregation re-envision its educational programs, specifically the religious school.

In the study of 10 successful schools throughout the U.S., Wertheimer and his colleagues identify the six “noteworthy characteristics” and five “enabling factors” shared by the institutions.

Beth El’s last curriculum review was in 2001, says Rabbi Howard Rosenbaum, who has served as the religious school’s educational director since 1994. “There are always new developments in general education and Jewish education,” Rosenbaum says. “Even if things are working well, it’s still important to review your program in order to see which things are working and which are not working as well as they could.”

“The idea was to help the committee dream and vision for the future, to envision what Beth El might look like in five years, to prioritize the elements of the vision, and to work on implementation plans,” says Dashefsky. Earlier this year, the education committee was expanded to include Beth El’s rabbis and board members. Dashefsky brought to the discussion the words of Conservative educator, Rabbi Seymour Fox, z”l: “Dream the ideal, assess the real, and plan for something in-between.”

“Since 2001, the basics remained very much the same,” Rosenbaum says. “The school’s major emphases all along have been tfilah [prayer] and mitzvot. We enhanced a third major area of focus, based on parent input and focus groups for adults and children – tikkun olam. Both the committee and parents also felt that it was important to strengthen Israel, Bible, and Hebrew language as our secondary areas of focus.”

A third area of academic renewal deemed high-priority is experiential education, action-oriented Jewish learning. Last year, the religious school initiated a pilot program of academic and arts electives, or “chugim.” Though Rosenbaum will be soliciting parents for feedback later in the school year, he has already heard that students are positive about the new activities. “One of the things that we hear the kids want more of is learning through doing,” he says. “What they love about chugim is that it’s something they can choose to do, experiential learning outside the regular curriculum.”

In its strategic planning process, the education committee discussed ways to strengthen community, Wertheimer’s first “noteworthy characteristic,” by tying the school into other aspects of the synagogue and the community, and by involving parents, the congregation, and Jewish students outside the religious school. A new initiative, Mishpacha Mitzvah Madness, encourages families to perform the mitzvot of Shabbat and holidays together at home. Families receive a checklist of relevant mitzvot and get points for each item they complete; the family with the most points wins a prize and the others are entered into a drawing. A regular newsletter outlines the underlying principles of the mitzvot and links to related resources. At Sunday-school dropoff during warm weather, parents can socialize over coffee and bagels at the “tailgating” tent set up near the parking lot.

The tikkun olam component of the curriculum also serves to strengthen the synagogue community, Rosenbaum says. Each religious-school class chooses a year-long mitzvah project in the community. All seventh-graders participate in monthly community-service projects at the Jewish assisted-living facilities in greater Hartford and at the Jewish Association for Community Living group home in West Hartford. The congregation collaborates regularly on two projects with Charter Oak Cultural Center in Hartford, preparing and serving a monthly meal for hungry families, and hosting an annual Mitzvah Mall at the synagogue to raise money for local non-profit organizations.

Dashefsky says that there are more ideas in the works, including on-site family- and parent-education programs, ongoing professional development for education staff, and involving Beth El teens who are studying at Yachad: Greater Hartford Jewish Community High School, in working with the religious-school students.

“Through the new school initiative, we are looking to bring really meaningful learning to students of all ages,” Dashefsky says. “Meaningful learning involves analysis, ideas, and discussion of ethical dilemmas and raising questions to help students develop personal relationships to God and to their Judaism.”

The Beth El community has already accomplished and set in motion a great deal of creative change, Dashefsky says, and is just at the beginning of its journey. She quotes former Israeli education minister Zalman Aranne: “Education is an unfinished symphony.” 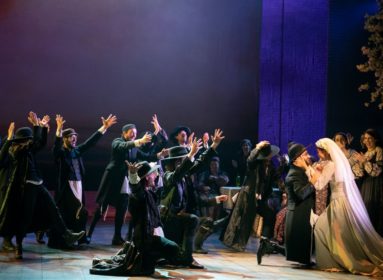