Celebrated in May, Jewish American Heritage Month (JAHM) is a national month of recognition of the more than 350-year history of Jewish contributions to American culture – acknowledging the achievements of Jewish Americans in fields ranging from sports and arts and entertainment to medicine, business, science, government and military service.

This year, JAHM is devoted to the theme entertainment. The history of American entertainment and the history of the Jewish people in the United States are inextricably intertwined. Immigrant Jewish entrepreneurs or their sons — like Sam Goldwyn, Jack and Harry Warner, Louis B. Mayer – were integral to the creation of Hollywood. Jews were once the heads simultaneously of the three major American television networks: William Paley at CBS, David Sarnoff at NBC and Leonard Goldenson at ABC.

The list of names of Jews in entertainment is too vast to include here. A few examples of Jews who have provided Broadway and Hollywood with some of their most enduring talent include playwrights like Arthur Miller and Wendy Wasserstein; directors like Jerome Robbins, Billy Wilder, Woody Allen and Steven Spielberg; composers like Irving Berlin, George Gershwin, Leonard Bernstein and Stephen Sondheim; and performers like the Marx Brothers, Lenny Bruce, Dustin Hoffman, Jerry Seinfeld, Jon Stewart and Barbra Streisand.

With this issue, we begin a month-long look at some of those working in the field of entertainment who grew up – and often began their love affair with the stage — in Connecticut’s Jewish communities.

Remy Zaken’s professional acting career started at age nine when she landed the role of Annie in Annie Warbucks, the sequel to Annie, at the Polka Dot Playhouse in Bridgeport. That was soon followed by a national tour revival of E.L. Doctorow’s Ragtime, and a New York debut Off-Broadway at the Public Theater in the role of Rini in George C. Wolfe’s Radiant Baby, a play detailing the life of artist Keith Haring.  Zaken is perhaps best known as one of the youngest cast members in the original Broadway production of Spring Awakening at the Eugene O’Neill Theatre, playing the role of Thea from 2006 to 2008. She had the title role in Off-Broadway’s Freckleface Strawberry: The Musical, which ran from 2010 to 2012. A graduate of Columbia University with a BA in psychology, she appears in the upcoming short film “Sing Along.”

“I have been singing ever since I could talk,” says Zaken. “I always loved to sing but I had very bad stage fright. In third grade, I was enrolled in a day camp over the summer, and my drama teacher had suggested I go to Crystal Theatre in Norwalk. I instantly fell in love with acting and begged my parents to let me continue. We agreed that as long as I could maintain straight As in school, I could act. They bought a subscription to Backstage, a newspaper for actors, and in 1999, when I was in fifth grade, I landed my first role [Annie in Annie Warbucks]. I then got an agent and the rest fell into place.”

Raised in a Conservative household in Westport, Zaken attended shul on the High Holidays. But, as the stage took over more of her time, that practice became more and more difficult.  “So, I discussed praying privately, especially for Yom Kippur, with my parents. I still keep that practice to this day. I find being alone helps me reflect better,” she says.

Today, Zaken is busier than ever, auditioning and doing readings and demos for composers. She will also perform in concert on March 18 in New York, with her good friend and Spring Awakening co-star Gabe Violett.

“I absolutely love new work,” she says. “It’s such a pleasure to be involved in the creative process and helping figure out a character.”

These days, besides the stage, Zaken is also focused on a goal of a different sort.

“I’ve applied for Taglit-Birthright Israel and I cannot wait to go to Israel,” she says. “I think that I really need to reconnect to my roots, and exploring Israel will be priceless. My mom went there a couple of years ago and came back with a new vigor and faith.”

Steven Mooney hit the ground running – career-wise, that is – after graduating from Marymount Manhattan College in 2010 with a degree in theater.

After performing in “New York Fringe Festival,” an original musical in Manhattan, he landed his first professional job performing in a dinner theater production of the musical “The 25th Annual Putnam County Spelling Bee” in Sanibel Island, Fla., which he followed up with a roll in a farce by Ray Cooney called “It Runs in the Family.” Mooney then came back to West Hartford to appear in “You’re a Good Man, Charlie Brown” at Playhouse on the Park, then joined the cast of a production of “Spelling Bee” in Lancaster, Penn., followed by a roll in the children production of “Miss Nelson is Missing.”

Last summer, Mooney joined the cast of the national touring company of “Fiddler on the Roof” that criss-crossed the country for nine months, and wrapped up only recently in Springfield, Mass.

“Right before the curtain went up, I heard someone make an announcement on stage that the performance was sponsored in part by the Jewish Ledger and I thought, ‘wow, I know that paper very well!’”

This summer, Mooney will appear in a production of the musical “Shrek” in Fort Myers, Fla. that will run from June to mid-August.

“My very first production was Cinderella at the JCC in 1994,” he recalls. “My sister was in it and I was insanely jealous. They were looking for little kids to be mice. We popped up on stage when the mice turned into horses. I was in first grade and the musical was choreographed by a guy named Kevin Duda, who is now on Broadway in the Book of Mormon. I believe that he was a student at the [University of Hartford’s] Hartt School of Music, and right after Cinderella he was working on a production of Pippin at the college where he was looking for a child to play the role of Theo. He asked my parents if I could do it, and he asked me if I wanted to do it, and I did. So that was my first actual work in theater.

“I continued every year doing the JCC musicals from first grade to twelfth grade and I totally value those memories I have of the JCC.  I also did a lot of work in the University of Hartford Community Division, as well as West Hartford Community Summer Theater.”

Raviv (Ricky) Ullman was born in Eilat, Israel in 1986 to American parents Laura (née Ehrenkranz), a teacher, and Brian Ullman, a printer. Just after his first birthday, the family moved from their kibbutz to Norwalk and then Fairfield, where Ullman grew up. His maternal grandfather, Rabbi Joseph Ehrenkranz, is rabbi emeritus of Congregation Agudath Sholom in Stamford. Ullman is a first cousin, twice removed, of former Connecticut Senator Joe Lieberman. Lieberman’s mother and Ullman’s matrilineal great-grandmother were sisters.

Ullman is best known for playing Phil Diffy, the main character in the Disney Channel series “Phil of the Future.” His latest acting job was playing the role of Kip on the Lifetime sitcom Rita Rocks.

“Having performed made-up plays for my parents and any other house guests that were kind enough to lend their attention, I remember being blown away by a production of “Amelia Bedelia” that a summer theater camp was performing at our local library in Fairfield,” recalls Ullman. “Realizing that real kids could perform for a real audience, I auditioned the following summer for the same Polka Dot Theater Camp and landed the role of Peter in “Peter Pan.” I was eight, and I was hooked.”

Imbued with a strong Jewish identity, Ullman does not let his acting career get in the way of his love for Judaism and his commitment to Jewish life.

“I observe Shabbat as much as I am able. There are definitely times when this becomes harder than others – most theater you perform eight shows a week, which includes a Friday night show and two on Saturday,” he says. “When I’m in between jobs though, I host Shabbat dinners at my little apartment in Brooklyn and go home to Fairfield when possible. As a storyteller, I find it deeply inspiring to observe a practice that has been handed down for the entire history of Judaism.”

“There is a great unknown when it comes to the professional arts – where and when your next job will come, how long it will support you, who your co-workers will be…,” he adds. “I’d say that my greatest comfort is the constant in my life, which at the moment is hosting Shabbat dinners and searching for the best challah in Brooklyn.”

When asked how he first got hooked on the stage, Nathan Klau doesn’t miss a beat.

“My mom — the world famous Barbara Klau — is a wonderfully gifted actor, singer, piano player (and chicken soup maker). While she was raising five kids, she found time to perform in plays, musicals, and as a solo performer throughout the community,” says Klau.  “I have no doubt in my mind that it was Mom’s joyful connection with performing that encouraged my three older brothers and sisters to get on stage as well.  I was out of my shell at a very early age and when I realized that I could get validated at the same time, I was hooked.”

Klau grew up in Simsbury, where his parents – [the world famous] Barbara and David – still live. While at Yale University, where he majored in history with a minor in theater studies, he took a few acting classes; but his serious training, he says, “involved doing lots of shows as well as singing with a capella groups – The Duke’s Men of Yale and The Whiffenpoofs.”

Klau’s acting credits include the national touring productions of Jersey Boys, The Lion King (Timon and Zazu standby), Joseph and the Amazing Technicolor Dreamcoat, Forever Plaid, Annie, and Anything Goes.

Today, Klau lives in New York’s Washington Heights and has “transitioned into something a little more ‘stable,’” as he puts it, by tutoring teens in standardized tests like the ACT and SAT.  But he’s also keeping his performer juices flowing by studying improvisation at the People’s Improv Theater (known as “The Pit”) in Manhattan and auditioning for the occasional commercial.

This summer, Klau wil be back on stage as Igor in Young Frankenstein, a co-production at The Gateway Playhouse in Long Island and The Ogonquit Playhouse in Maine.

If Klau’s mom inspired him, then surely it was the Greater Hartford Jewish Community Center in West Hartford – now the Mandell JCC — that nurtured his budding talent.

“I really can’t say enough about how formative the JCC teen musicals were for me,” he says. “My older sisters performed lead roles in shows like Oklahoma and The Pajama Game, and I would sit in the audience entranced and eager to join. I’ll never forget being in the sixth grade — not old enough to be in the teen show yet — and crashing my older sister Michal’s audition because I was so anxious to be a part of the magic.  I truly fell in love with musical theater at the JCC doing shows like Fiddler, Guys and Dolls, West Side Story, and Grease.  I got to play fantastic roles in a fun, collaborative and social atmosphere; there was also a particularly wonderful director, Chris Mansfield, whose humor and passion completely inspired me and connected me with the pure joy and exhilaration of putting on a show.”

WHO’s WHO on the cover 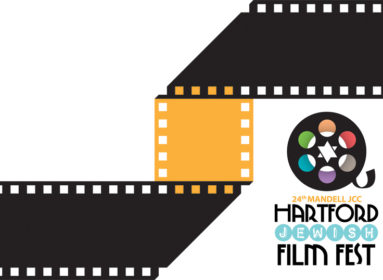