A Miracle and an Outrage in Washington

The National Archives is now exhibiting restored holy books and communal documents that belonged to the Jewish community of Iraq.

If you happen to be in Washington, DC, between now and January, you can see a piece of Jewish history that was never supposed to see the light of day. The National Archives is now exhibiting restored holy books and communal documents that belonged to the Jewish community of Iraq.

In 1940, the Iraqi Jewish community numbered 137,000 people. Jews made up more than a quarter of the population of Baghdad. A 2,500-year-old community, Iraq had for centuries been a major center of Jewish learning. The Babylonian Talmud was written there.

The yeshivot in Karbala and Baghdad were considered among the greatest in the world.

According to Dhiaa Kasim Kashi, a Shi’ite Muslim interviewed in the 2008 book Iraq’s Last Jews, by the 1930s, the Jews of Iraq had become leaders in every field. “All of Iraq’s famous musicians and composers were Jewish,” he said.

“Jews,” he continued, “were so central to commercial life in Iraq that business across the country used to shut down on Saturdays because it was the Jewish Shabbat. They were the most prominent members of every elite profession – bankers, doctors, lawyers, professors, engineers, etc.”

All of this began to end with the rise of the Nazis in the 1930s. Due to rampant Islamic Jew hatred, Arab leaders were drawn to the Nazis. For their part, the Nazis were quick to capitalize on their popularity. The German ambassador to Iraq, Fritz Grobba, cultivated Nazi sympathizers in the Iraqi military and organized a pro-Nazi military coup in April 1941.

On June 1, 1941, as Jews celebrated the festival of Shavuot, the pro-Nazi government carried out a massive pogrom. Estimates place the number of Jews murdered at anywhere between 180 and 900. Nine hundred Jewish homes were destroyed. Hundreds of Jewish shops and businesses were looted and burned.

The pogrom, which came to be known as the Farhud, or “violent dispossession,” marked the beginning of the end of the Iraqi Jewish community.

The immediate victims of Iraq’s unyielding rejection of Jewish national liberation were the Jews of Iraq. In 1950, the exodus began. By the end of 1952, when the government shut the remaining Jews in, 124,000 Jews had fled Iraq, mainly to Israel. Forced to abandon their private and communal property, their possessions became hostage to the regime.

The few thousand Jews left in Iraq lived in utter terror. But even in their reduced state, they tried to protect the property of their phantom community.

In Baghdad, only one synagogue remained in operation. The Jews brought all the communal documents and holy books there for storage.

But as Harold Rhode, a recently retired US Defense Department cultural expert, reported in August at PJM Media, in 1985 Saddam Hussein sent his henchmen to the synagogue with several trucks. They stole the documentary history of the community in broad daylight.

Rhode explained that Saddam ordered the theft of the Jewish community’s property both to humiliate the Jews and Israel and to impress his fellow Arabs. As he put it, from a local cultural perspective, “Humiliation – i.e., shaming another’s personal reputation – is more important and more powerful than physical cruelty.

“By capturing the Jewish archives, Saddam was humiliating the Jewish people. He was showing how powerless the Jews were to stop him.”

From a pan-Arab perspective, Saddam demonstrated that he “was in the vanguard of protecting and regaining Arab honor, and was therefore more worthy of Arab/Muslim leadership than were the others.”

Rhode was deployed to Iraq shortly after the US-led overthrow of Saddam’s regime. By the time he arrived in May 2003, there were only a dozen Jews still living in Iraq.

Rhode was the first American official informed of the existence of the archive. It was stored in the cellar of the headquarters of Saddam’s mukhabarat, or secret police. When Rhode arrived at the building with a small detail of soldiers and New York Times reporter Judith Miller, the building had just been flooded by an unexploded shell that had punctured the water main.

When he realized the dimensions of the archive, now largely underwater, Rhode moved heaven and earth to save it. Due to Rhode’s action, and the support he received from Iraqi leader Ahmed Chalabi, vice president Dick Cheney and defense secretary Donald Rumsfeld, the archive – which included everything from school records to 500-year-old copies of the Bible – was saved on Shavuot 2003 and sent to the US.

Once the archive was safely in the US, the State Department spent $3 million restoring the 2,700 books and tens of thousands of documents. In the meantime, back in Iraq, there are still hundreds of Torah scrolls languishing in a government cellar, inaccessible to the public, and in a horrible state of disrepair.

The fact that the archive was rescued from Saddam’s vault and is now being shown to the public is a miracle.

Jews could safely enter Germany, and even live there after the Nazis were defeated. Jews cannot safely enter, let alone live in, Iraq.

The difference between Jewish property stolen by the Nazis and Jewish property stolen by Arab regimes is political. It is politically acceptable to acknowledge that the Nazis were criminals. But the Arabs have never had to pay a price for their persecution and eventual destruction of their Jewish communities. No one wishes to recognize the fact that it is anti-Semitism that drives the Islamic quest to destroy the Jewish state.

The only lawful owners of the Iraqi Jewish archive that is being shown in Washington are the Iraqi Jews and their descendants, who are now overwhelmingly Israelis. The only place the archive should be sent is the Babylonian Jewry Heritage Center in Or Yehuda, the only museum in the world dedicated to preserving the cultural heritage of the 2,500-year-old Jewish community of Iraq.

Yet for the American foreign policy establishment, besotted by a quasi-religious belief that the establishment of a Jew-free Palestinian state on Israeli land will cure everything from Islamic jihad to the common cold, recognizing this simple truth is a bridge too far. Restoring the Iraqi Jewish archive to its Israeli owners would be tantamount to recognizing that the cause of the Arab world’s conflict with Israel is Arab anti-Semitism.

A petition is now circulating demanding that the US government return the archive to its rightful owners in Israel.

At this point, it would be a great miracle if they would just agree to keep it safe in Washington until an American government comes along that decides to base its Middle East policies on the truth.

Caroline Glick is deputy managing editor of The Jerusalem Post, where this first appeared. 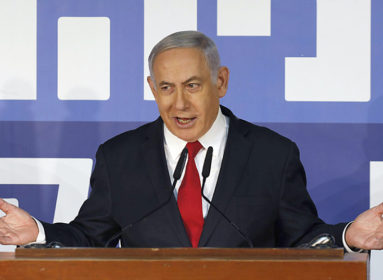 MALALA’S LESSONS FOR PAKISTAN — AND FOR US