The woman’s voice in Kaddish

STAMFORD – Some of the most thoughtful ideas emerge from the most difficult experiences.

Barbara Ashkenas was mourning the loss of her mother in 2007 when a question began to emerge: How does reciting Kaddish differ for women?

Seven years later, the book she co-edited with fellow Stamford resident Michal Smart struck a national chord when it was selected for a National Jewish Book Award in the category of Contemporary Jewish Life and Practice.

The seeds of Kaddish: Women’s Voices (Urim Publications, 2013) were planted in 2007, when Ashkenas was reciting Kaddish for her mother at Congregation Agudath Sholom in Stamford, and a handful of other women in her synagogue community were doing the same for their loved ones. “Together, we became a warm and supportive group, jointly embracing our sadness and quenching our thirst for intimacy and kindred spirituality,” Ashkenas says. “Over the years, while raising her children in Stamford, I had befriended many women, but I must admit, the ‘Kaddish bond’ was rare and special.”

While in mourning, Ashkenas began exploring what made Kaddish different for women, turning to Jewish literature for guidance and insight. “Yet none of these were written from a woman’s perspective,” she says. “I began to imagine a book about women saying Kaddish; one that shared our experiences and could serve as a guidepost to others.” Ashkenas discussed her idea with family and Kaddish friends, who all encouraged her to bring the vision to fruition.

In April 2010, Ashkenas was introduced to Michal Smart, director of Judaic Studies at Bi-Cultural Day School in Stamford. The two met at a local Starbucks; in mid-conversation, Frank Sinatra’s song, “My Way,” began playing over the speakers. “When we discovered that this song had been played at both my mother’s and her father’s funerals, we knew that we were meant to collaborate on this project,” Ashkenas recalls. Smart became lead editor on the book. “My vision would never have become a reality without her,” Ashkenas says.   The two continued to plan the project the following month in Ashkenas’s living room, gathering a dozen women who had recently lost loved ones and were saying Kaddish. “Loss was the currency of intimacy, and through listening to one another, a community was created,” Ashkenas says. “The room filled with a sense of poignant and powerful possibility.” Smart put out a call for essays from women on the meaning of Kaddish. “When I first joined Barbara in editing this collection, I thought it was about women saying Kaddish,” she says. “As the essays poured in, I was humbled to discover that they were about so much more. They’re about healing from loss, forgiveness, and letting go of unfulfilled dreams, about choosing life, and about how people derive personal meaning from traditional liturgy and Halakha. They speak the truth about family relationships – some loving, and others fraught with pain. They illustrate how a Jewish community can be embracing or exclusive. They testify to the spiritual hunger of Jewish women, and their abundant wisdom – and perhaps above all else, the power of love.”

The resulting book, Kaddish: Women’s Voices, is a collection of personal reflections and “part of a growing conversation,” Ashkenas says, “where women’s voices can be heard through the heartstrings of Kaddish.”

Ashkenas points up an interesting evolution in the American Jewish community’s attitude toward reciting Kaddish. In the first edition of Rabbi Maurice Lamm’s 1969 classic, The Jewish Way in Death and Mourning, the author writes, “the obligation to recite Kaddish is placed upon the son, not the daughter.” In the second edition of the book, published 30 years later, Lamm writes, “today, reciting the Kaddish is open to all women who want to express their grief in this manner and speak to the Almighty on behalf of their beloved departed relatives … All Jewish people stand to benefit from a woman’s holy resolve in saying Kaddish.”

“I believe that women who commit to saying Kaddish do indeed have a holy resolve, and that shines through in the pages of our book,” Ashkenas says. “Some resolve to hold on to their loved one a little longer. Some need to resolve issues with the departed, and use Kaddish to reflect and bring closure. Still others resolve to renew their commitment to Jewish life. I hope this book will serve as a companion to others, spark many meaningful conversations, and open the possibilities for women to choose how to mourn and remember a loved one.”

Smart sees Kaddish as an essential navigational tool through the waters of loss. “Death steals those closest to us and takes them to another realm, seemingly beyond reach,” she says. “Through Kaddish, we extend our arms into that void, seeking to stay connected and to aid the departed on their journey. Knowingly or unknowingly, in so doing, the mourner embarks upon a journey of her own. This book is a record of the journey that is Kaddish, its dark corners and unexpected vistas, told with courage, generosity, and depth. It is a precious record of women searching for their place within Jewish tradition, and exploring the connections that make human life worthwhile. I hope readers will feel as I do – that it is a privilege to accompany them, and that we resume our own journeys enriched.” 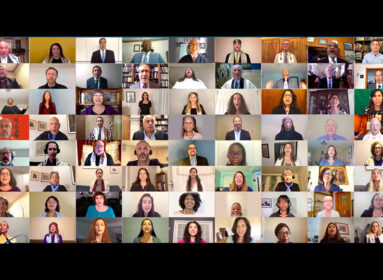