NEW YORK, N.Y. – For the past year, filmmaker Michael Levine and producer Michael Green have been documenting the story of the last family-owned matzo factory in America, the Streit’s Matzo factory on New York’s historic Lower East Side. The result of their work is Streit’s: Matzo and the American Dream [www.matzofilm.com], a feature length documentary film, which after a successful Kickstarter campaign last summer, is ready to make its way to the film festival circuit and audiences around the world. The filmmakers are now looking for a little extra help from the public to make that possible.

Taken in the late 1940s, Rabbi Osher Levitan (right), who supervised production at Streit’s until his death in 1953, stands at the matzo oven on the factory’s first floor on the annual day of shmurah matzo production, with several rabbis and dignitaries from around the country, who each year would visit and celebrate the end of the baking season, each leaving with shmurah matzo for their family. The tradition continues to this day.

The Streit’s story is a unique one. When Aron Streit first opened the bakery in 1925 in four tenement buildings on New York’s Lower East Side, it sat at the heart of the largest Jewish immigrant community in the world. Today, nearly a century later, the neighborhood is nearly unrecognizable, as gentrification has transformed the immigrant neighborhood into a bustling mélange of nightclubs, swanky restaurants, and high-priced real estate. Likewise, the nature of the American economy has changed, with manufacturing moving out of the cities, if not the country, and fifth-generation family businesses a rarity. In this sense, Streit’s is very much the last of its kind.

Behind the walls of those same four tenements, Streit’s remains, producing 40% of the nation’s matzo, using 80-year-old machinery, run by bakery union workers with 30 or more years of experience, who have become an extended part of the Streit’s family itself. While its competitors have long ago sold to multinational corporations, Streit’s remains a living connection to American Jewish history. Today, Streit’s is run by the fourth and fifth generation of the family.

It is this story of resilience, perseverance, and history that drove Levine to approach the family about making a film about the business. Says the filmmaker, “I had passed by the factory for years, not knowing what lay inside. One day, I paused to glance in the window and a worker handed me a hot matzo straight out of the oven. He must have seen my astonishment and invited me in for a tour. The moment I stepped inside, into the hum of ancient machinery, of workers and rabbis buzzing about, seeing the matzo run up and down five floors on conveyors, I knew there was an amazing history here, I knew there was a story to be told.”

The film is expected to screen in film festivals later this year, with further plans for a release in theaters and on television, as well as screenings at temples and Jewish community centers.

“The motivation to make this film came out of a sense of the importance of not only preserving history, but showing that even in today’s rapidly changing world, history can coexist with the present, not simply as nostalgia, but as a thriving way of life,” says Levine. “If the film can act as a catalyst to raise funds and draw attention to many of our in-need historical institutions, we will have achieved a tremendous part of our goal.”

It will take some additional funding to reach that goal. The filmmakers aim to raise $25,000 by the end of April in order to fund a film festival run and put the finishing touches on the film. Donors will have the opportunity to tour the Streit’s factory, and more.  Says Levine, “To us, everyone who has offered support is part of the crew, and it means the world to us that people have come forward to help us tell this incredible story.” 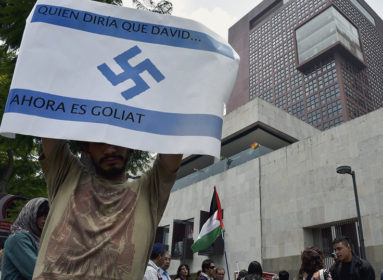