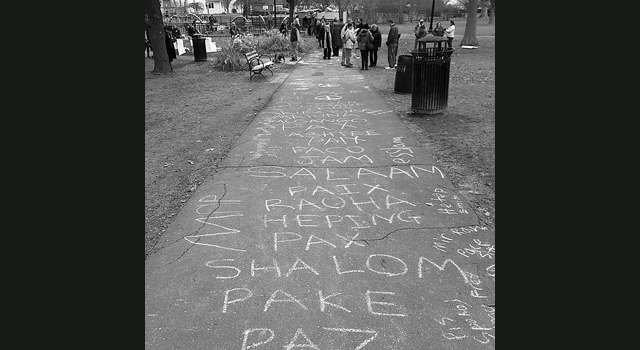 On Wednesday, May 23, three swastikas were discovered carved into a wooden fence in Ridgefield’s popular Ballard Park. The discovery of antisemitic graffiti is the latest in a long line of antisemitic incidents to hit the town of Ridgefield over the past 18 months.

The five-acre park located on Ridgefield’s Main Street includes an “Imagination Station” playground, gardens and greenery and a bandstand where summer concerts are held. It is close to two synagogues.

“My first concern is always for the safety of our community,” Rabbi Rachel Bearman, spiritual leader of Congregation B’nai Chaim, said in a letter to congregants.

Bearman, whose Georgetown synagogue sits just over the Ridgefield line, told congregants that, upon hearing of the incident, she immediately contacted police who “assured me that the police department is taking this very seriously and told me that [they do] not believe this incident represents any kind of danger to our congregation.”

Despite their frustration, leaders of the Anti-Defamation League (ADL), which has worked with the community to counter the spate of antisemitic incidents that continue to plague Ridgefield, is also heartened by the response of both the Ridgefield police and town leadership.

“Ridgefield town leadership and police have taken these incidents very seriously and have understood how they are more than simple vandalism, but an attack on a community and an attempt to make people feel unsafe and unwelcome in their hometown,” ADL Assistant Director Andy Friedland told the Ledger.

As the Ledger went to press on Tuesday, May 29, an arrest had not yet been made.

Since November 2016, Ridgefield police have investigated a slew of incidents of antisemitic graffiti and other forms of hate speech at a variety of town locations.

Antisemitic symbols were first found at Ballard Park back in November 2016. A few months later, in March 2017, a swastika and antisemitic and racist language were painted on the outside of Ridgefield High School. Then, in both June and August 2017, more antisemitic and racist graffiti was found at Ballard Park, including hateful graffiti painted on the park’s outdoor stage. In September 2017, a swastika was found scratched into a desk at the high school, and two months later another swastika was drawn on a classroom door. Recently, antisemitic graffiti and other forms of hate speech were also found at Ridgefield’s Aldrich Museum and Masonic Lodge.

This latest incident comes despite the heightened vigilance of the Ridgefield police department – and despite educational programs that the ADL provided to Ridgefield’s town leadership and public schools in the aftermath of previous incidents.

“I think it was a good time for us to begin looking at this more clearly and to begin to focus our attention on implementing a program,” Marconi told the Ledger in December 2017. “So we started with the ADL, building the bonds for a stronger community.”

The three then met with ADL Executive Director Steven Ginsberg and a Dec. 5 program was planned for Thanksgiving weekend.

That program, entitled “Strengthening the Bonds of our Community,” was attended by 50 Ridgefield town leaders, including town department heads, members of the Board of Selectmen, the Board of Education, and the Board of Finance, as well as all of the school principals and the Superintendent of Schools. At the same time, ADL conducted a World of Difference education program at Ridgefield High School.

ADL also offered a $2,000 reward for information leading to the arrest and conviction of the individual or individuals responsible for incidents of swastika graffiti around Ridgefield – an offer that still stands.

“I can say without hesitation that we have done a lot of good work since March 2017,” said Bearman. “I know that there will always be more that needs to be done. I remain committed to that work, and I know that my colleagues and our partners within Ridgefield’s government feel the same way.”

“We have invested a lot of time and energy responding to swastikas and other incidents of hatred and bigotry in the past year and a half, partnering with colleagues, town officials, school administrators, and more,” he wrote in a letter. “And while this latest incident shows that there is more work ahead, I am appreciative of all that we have accomplished, how we have succeeded in engaging leaders of this community in new and meaningful conversations which will continue to lead to action.”

Friedland considers the community response to be more significant than the antisemitic acts themselves.

“We often say that it’s not the fact that an incident happened that’s a reflection of a town’s character because they happen everywhere,” said Friedlan. “The true character comes out in the response, which in Ridgefield’s case has been a learning opportunity and has brought people in that town closer together. We have connected with leaders in the Ridgefield Jewish community and will continue to work collaboratively to not let incidents of hate define our community.”

CAP: In November 2017, Ridgefield residents came together at the town’s Ballard Park to “Reclaim the Space,” after antisemitic graffiti was discovered in the park.