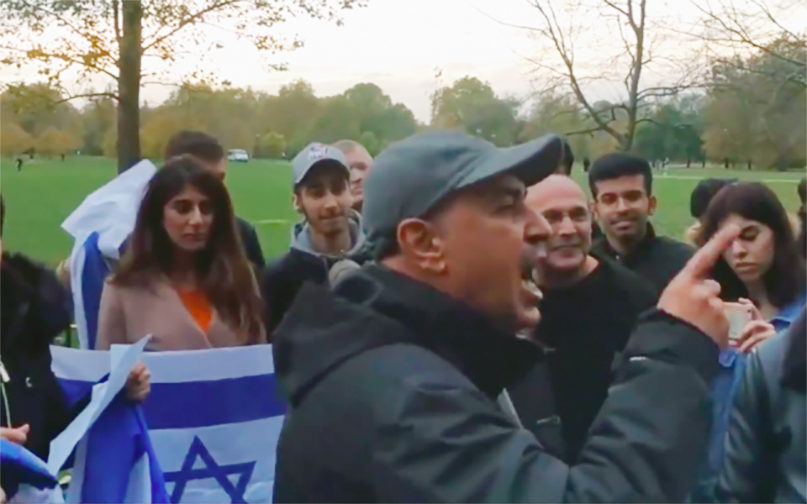 (JTA) – A vigil held by pro-Israel activists in London for Jews murdered in Arab countries was dispersed after men shouted in Arabic about killing Jews. The event by the Israel Advocacy Movement was held Wednesday, Nov. 7 on Speaker’s Corner in Hyde Park, which is known for its culture of free speech and passionate street preachers championing various causes. A few dozen people holding Israeli flags and candles gathered there ahead of Kristallnacht, to highlight the suffering and slaying around the same time of many hundreds of Jews who were killed and wounded in pogroms across the Arab world. Joseph Cohen, an Israel Advocacy Movement activist, filmed the event as about 20 men drowned his talk shouting “Jews, remember Khaybar, the army of Muhammad is returning.” The cry relates to an event in the seventh century when Muslims massacred and expelled Jews from the town of Khaybar, located in modern-day Saudi Arabia. Some of the men surrounded the pro-Jewish activists and shoved them.

“As if on cue, before we’d even begun, an extremist began screaming a death chant of Jews,” Cohen said. “The vigil went from bad to worse, they shouted us down, they would not allow us to remember our dead until we had to call off the vigil. … [the incident] goes to the heart of the matter we’d gathered to commemorate in the first place.”

A German woman who witnessed the event said: “A Christian was preaching and the atmosphere was friendly, a Muslim was preaching and there were shouts but the atmosphere was still friendly, but as soon as Jews wanted to honor their dead a whole of crowd appeared out of nowhere, as soon as the flags appeared, the cursing began against people who only wanted to honor their dead. I think what we just saw was antisemitism.”