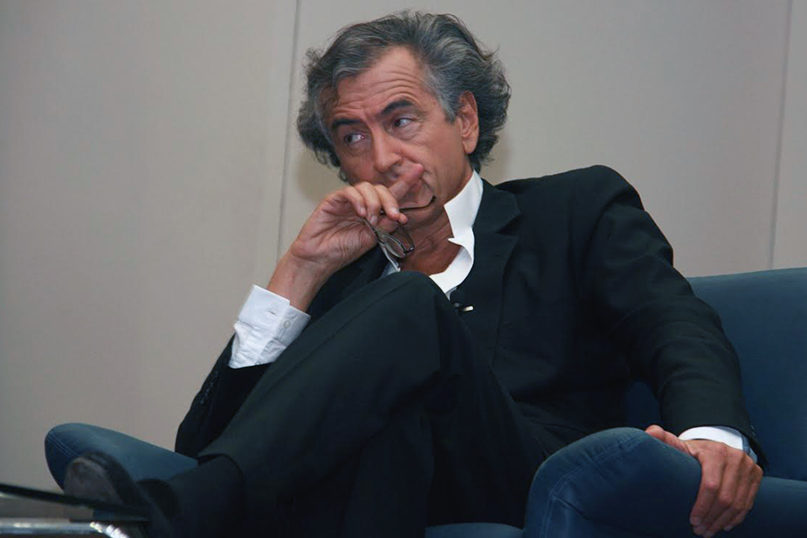 In his new book, a renowned French intellectual and human rights advocate talks about America’s abdication of its responsibility to lead the world.

(JNS) From fighting for human rights to advocating for the Kurds and their desire for a homeland, Bernard-Henri Lévy, 70, has sounded the alarm on contemporary issues and issued warnings about the decline on the left to uphold liberal values.

A French public intellectual, media personality and author, he was one of the leaders of the Nouveaux Philosophes (“New Philosophers”) movement in 1976.

Lévy released his 28th book in February, The Empire and the Five Kings: America’s Abdication and the Fate of the World, about how the United States has relinquished its responsibility to lead throughout the world, leaving power vacuums that have been taken over by its adversaries.

He has repeatedly written about how tribalism has worsened on both sides of the ideological spectrum; liberals have shifted further left, while many on the right have become populist.

Recently, JNS talked with Lévy by phone. The interview has been edited for brevity and clarity.

Q: This latest work of yours, how does it stand out from your other published books?

A: This book is a wake-up [call]. We are at the turning points of the history of America, of the West and of civilization. If we don’t wake up very, very quickly, we are going to be hitting to the wall – the wall of destruction of our liberal and our democratic values. It is a book of emergency.

Q: You said recently, “There is no correlation between education and wisdom. You can teach remembrance of the Holocaust all you want, but that’s not going to protect us against the return of the Beast.” Does that imply that George Santayana was wrong when he said, “Those who cannot remember the past are condemned to repeat it”?

A: Of course, it is important to teach, but it is not enough. Those populists, those neo-fascists, those antisemites who raise their head again, they are beyond knowledge and truth. They cannot be taught. They will not change their minds. They say that the truth has been made up; that the truth has been doctored. They live in a parallel world full of conspiracy theories. And the more we say the truth, the more they say that it is fake. We live in a strange world where the very idea of the truth is threatened and under attack. That’s why I say that it is not enough to say the truth.

People who engage themselves in this new populist trend are driven by something else. They don’t seek the truth. They’re searching for something else. There is a terrible, frightening pleasure in hating, in going to crazy and simple identity politics. [British Labour Party] Jeremy Corbyn knows well what he says about the Jews and Israel is bulls***, but he does not care. He cares about inflaming the spirits of his supporters by spreading fake information about the Jews and Israel. This is the real deficit. This is what I say in my book.

Q: If Brexit were to fail, could we see Jeremy Corbyn elected prime minister?

Q: Is the bigger threat in Europe and America the Corbyn-ization of the left or the populism of the right?

A: In America, you have the most stupid and dangerous right you’ve ever had. And you have also on the other side, the growing left, which is Jeremy Corbyn-ized, and which is the worst and the most stupid and the most virulent left we’ve had. For example, the extent of the BDS campaign that you have in America, you can see the stupid left in front of the stupid right. In America, the true liberals have to face these two dungeons.

This is one of the last conversations I had with [the late Arizona Sen.] John McCain a few months before he died. He told me, “Beware. Be careful. You will have to confront and you will have to fight against the worst right and the worst left. And they will feed each other.”

Q: What’s your reaction to the antisemitic and anti-Israel verbiage coming from Democrats such as Reps. Ilhan Omar and Rashida Tlaib?

A: It has to be combated. The comments are shameful, and they are stupid. Because from a liberal point of view, Israel – far from being despised or attacked – should be praised. When I defend Israel, I’m much more liberal than they are because Israel is a real liberal ethnic country. Israel is a real democracy. Israel is a positive place in the whole region where the Arabs have freedom of speech and so on.

This is what I would reply to them: That they are inconsistent liberals. On the very liberal grounds, Israel should be defended. They know nothing. They are ignorant of two things: what is Israel and what is a Jewish presence; and of the body of principles which is liberal thought. They are unfit for their ambitions.

Q: Here in the U.S., some Senate Democrats voted against legislation allowing state and local government to fight BDS, citing concerns that such measures infringe upon free speech.

A: I respect free speech more than anyone. I admire America for the First Amendment of the Constitution. But here again, there is a state of emergency. BDS is an antisemitic movement. What do we do? Do we accept antisemitism to spread? Maybe there is another way.

America has two duties: One is to ensure free speech; two is to continue to be the safe haven, a sanctuary, for all the Jews in the world. I cannot forget that my family, when they were prosecuted in Europe by antisemitism, some of them took refuge in America.

At the very least, we should shame BDS. All of these BDS arguments should be – if they are not prevented, if they are not censored because of the First Amendment – shown for their true colors, which is antisemitic. And BDS activists can and should be sued. Regardless of the First Amendment, you can sue someone; you can put them on trial, for incriminatory words made against others.

If America does not make a breach in the First Amendment, they should be sued for discrimination and for calling for hatred.

Q: In France, does free speech include anti-Israel, pro-BDS sentiment?

Q: What’s your reaction to President Trump apparently walking back his planned withdrawal of troops from Syria? Can other countries, including France, help the U.S. there, in addition to protecting our Kurdish allies?

A: First of all, it is very bad news for Israel. I know that many Israelis are very anxious about that because it is a re-enforcement of Hezbollah, of Iran and of Syria, who are enemies of Israel.

Our attitude towards the Kurds is absolute betrayal. The Kurds are our allies. They spilled their blood for us Westerners, Americans, Europeans. When the job is finished, we say to the Kurds: “Now go to hell.” It is a treachery. And it means the total abandonment of the Kurds.

Q: The president said that he would keep U.S. troops in Syria and Iraq to “watch Iran.”

A: The very fact that he made this announcement is a deuce. What should we believe: the first announcement or the second one? America has to stand by its word. Nobody can believe it now.

A: Because they are not progressive. If a Kurdish state existed, it would probably be among all Muslim states the most democratic. The most open and protective of minorities. It could be protective for women, assuring equality between women and men.

The so-called progressives are joining hands with the worst reactionaries. They don’t have any problem with [Syrian President] Bashar Assad killing his own people. If we threaten to sanction Saudi Arabia, they will say that it is involvement in the affairs of another state. If we sanction Iran, they will say it is American intervention. If we say there is corruption in the Palestinian Authority, they will say it is an insult to the Palestinian identity. But if we say that there is a people supporting gender equality, that is friendly with Jews and Christians and religious minorities, that practices democracy – that they are against.

Q: What will it take for the Kurds to have a state?

We are an America who is unable to say to this gang of four, “Go to hell. We support a Kurdish state.” America, recently, under Trump, is unable to speak like this. America could say, “A Kurdish state exists, and we protect it. And it is under our umbrella.”

But no, Trump prefers to be friendly with [Russian President] Vladimir Putin, with Turkey and so on.

Q: In the aftermath of the Tree of Life synagogue massacre in Pittsburgh, why do we still see divisiveness among Jews? If an incident like that can’t bring Jews together, then what can?