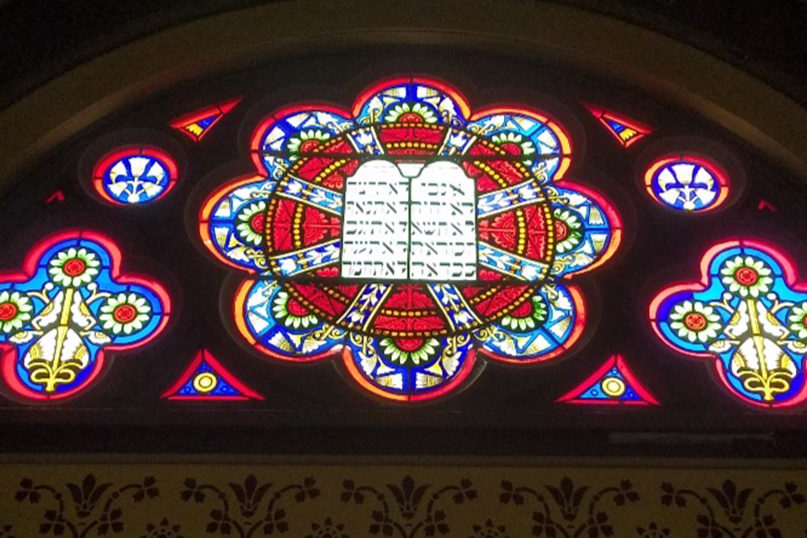 HARTFORD – When Rona Gollob sees the arched, stained glass window above the stage at Charter Oak Cultural Center she can just picture what it must have been like when the building housed Beth Israel Synagogue more than a century ago.

“When the sun hits it properly, the colors are just beautiful. It makes the whole sanctuary glow,” she says. “It sits just above where the ark was and I can just imagine sitting there being in a Shabbat service having the light come through that window with its vibrant colors.”

Original to 1876 when Beth Israel was built on Charter Oak Avenue, the Rose Window is now in serious need of repairs – the wooden framing around the stained glass is in danger of collapsing due to age and years of cold, snowy Connecticut winters.

Now, Gollob has pledged a matching donation challenge of $10,000 towards the approximately $54,000 needed to restore the window.

“I wanted to do something. I thought doing a matching challenge has to have a positive effect – that I could donate $10,000 and do it as a match and see how that goes,” Gollob explains. “I felt that doing the challenge was a good way to do this because it will get other people interested.”

When Congregation Beth Israel Synagogue was built on Charter Oak Avenue in Hartford in 1876, designed by architect George Keller in the Romanesque style, it was the first building to be constructed specifically as a synagogue in the state of Connecticut. It was also the first in the Hartford area to transition from Orthodox to Reform, affiliating with the Union of American Hebrew Congregations in 1878.

Beth Israel eventually moved to Farmington Avenue in West Hartford, but the Rose Window continues to overlook what was previously the synagogue sanctuary. Sitting above the spot where the ark and the bimah (now a stage) were located, the window features a Decalogue, a depiction of the Lukhot Habrit, the Ten Commandments.

Gollob became involved at Charter Oak in the 1990s when she attended a feminist Passover Seder there.

When Gollob’s daughter was attending Trinity and interning at Charter Oak, Rona became friends with Charter Oak’s director, Rabbi Donna Berman, and began attending events and classes at the Center.

“I’m very much into history. It doesn’t matter that I didn’t grow up here or have a connection to Beth Israel. I love finding out the history of places,” she says. “So the historical part of the building fascinates me.”

In 2015, Charter Oak honored Gollob with the Vision Award in Jewish Heritage for her commitment to her faith and to Greater Hartford’s Jewish and cultural communities.

“We are so moved by Rona’s generosity and commitment to preserving the shining heart of our historic building,” said Rabbi Donna Berman. “I hope other friends of Charter Oak will join her in saving this treasure.”