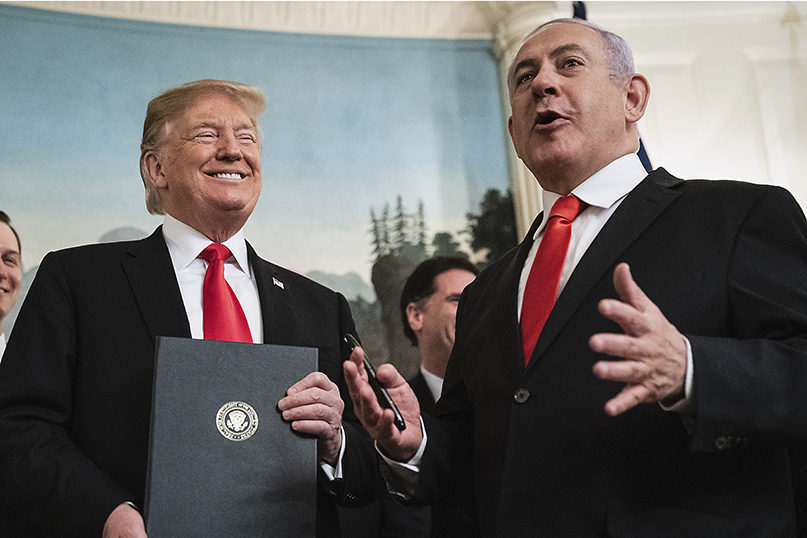 WASHINGTON (JTA) – On the eve of Israel’s elections, which took place earlier this week, President Donald Trump resurrected an idea that Americans and Israelis have for decades considered and always ultimately rejected – a mutual defense treaty.

“I had a call today with Prime Minister Netanyahu to discuss the possibility of moving forward with a Mutual Defense Treaty, between the United States and Israel, that would further anchor the tremendous alliance between our two countries,” Trump said Saturday on Twitter. “I look forward to continuing those discussions after the Israeli elections when we meet at the United Nations later this month!”

Sen. Lindsey Graham, (R-SC) has for a number of years been talking about advancing such a pact.

“This would be a game-changer for Israel’s security and would be sending the right message to Iran and other bad actors,” Graham said on Sunday. “I stand ready to lead efforts in the Senate if necessary.”

The Jewish Institute for National Security Affairs, a Washington think tank that works with top security officials in the United States, has for over a year been working on a proposal for a mutual defense pact.

“JINSA welcomes the news that President Trump and Prime Minister Netanyahu are exploring a U.S.-Israel mutual defense pact,” JINSA said in a statement. “This past July, a JINSA task force led by notable retired U.S. military leaders, chaired by Adm. James Stavridis, formerly NATO Supreme Allied Commander Europe, issued a paper advocating such a pact and drafted a proposed text for such a treaty.”

The idea is not a new one and has come up periodically almost since Israel’s inception. President Bill Clinton dangled its prospect to Netanyahu and then to Israeli Prime Minister Ehud Barak as an incentive to advance peace with the Palestinians. But the U.S.-Israel mutual defense pact idea has fallen apart each time it has been proposed.

Moshe Ya’alon, a former defense minister and military chief of staff who is number three on Benny Gantz’s Blue and White List – the party aiming to unseat Netanyahu – ran through the traditional objections in a tweet posted soon after Trump posted his.

“Netanyahu is using the American government for a new spin: ‘The U.S.-Israel Defense Treaty,’” Ya’alon said in his tweet. “Up to now, Israeli prime ministers have rejected the idea because of its flaws: 1) loss of freedom of action (must every Israeli operation be approved by Washington?) 2) Do we want our troops fighting in Afghanistan or Iraq, or U.S. troops fighting in Gaza?”

Americans also have raised concerns about attaching U.S. policy to the dictates of what Israel chooses to do to secure itself. Such concerns would likely be even more preeminent for President Donald Trump, whose foreign policy doctrine has been one of retreating from U.S. commitments.

“Every previous time sides examined this, both sides backed away because of fears it would constrain Israeli freedom of action because of the need for prior approvals,” Dan Shapiro, the U.S. ambassador to Israel under President Barack Obama, told the Jewish Telegraphic Agency. “And by the United States not wanting to be obligated for every action Israel takes in its defense.”

With those objections in mind, the plan proposed by JINSA narrows the scope of the proposed treaty.

“We arrived at a set of principles and provisions for a narrow formal treaty alliance which, unlike existing U.S. defense treaties stating unequivocally that an attack on one is an attack on all, would cover only a defined set of exceptional circumstances that would place either country in extreme peril,” says the JINSA paper. “Namely: the threat or use of weapons of mass destruction; major armed attack by a powerful regional or global power, or coalition of powers; an assault threatening vital lines of air and sea communication; an attack undermining Israel’s qualitative military edge; or an urgent request from either government.”

Trump’s hedged language – “discuss the possibility of moving forward” is very short of a commitment – might reflect his ambivalence about endorsing Benjamin Netanyahu.

Netanyahu reportedly was seeking a formal U.S. endorsement of his plans to annex parts of the West Bank, but all he got was an anonymous U.S. official saying that the Trump administration was not concerned about the idea either way. He also hoped for a full pardon for Jonathan Pollard, the spy for Israel on parole in New York, but that was not in the cards either.

Netanyahu’s tweet made it clear that Trump’s offer had more to do with protecting his political fortunes than it did with protecting Israel, but the offer did not emerge in a vacuum.

JINSA’s president, Michael Makovsky, told JTA that a treaty would add a “layer of deterrence” for Israel to its existing armor, which includes longstanding U.S. support for the country from both sides. A treaty would require 67 votes in the Senate, which would reinforce the bipartisan tenor of support for Israel, he said.

Makovsky noted that his organization’s proposed treaty explicitly does not pull either side into minor conflicts.

“Each party affirms it does not seek the intervention of the other Party in all possible conflicts, but only when Exceptional Circumstances arise threatening its strategic or economic viability or its very existence,” the draft says.

Additionally, he said, existing broader U.S. mutual defense pacts do not restrain allies from acting on their own. Britain freely won the 1982 Falklands War with Argentina without involving NATO, he noted, and France continues to act in Africa without consulting the same alliance.

“I would be surprised if a U.S. president would ask an Israeli soldier to fight in a predominantly Muslim country,” such as Iraq or Afghanistan, Makovsky added.

“This is a transparent and half-assed attempt to influence the Israeli election at the last moment,” he said of the Trump tweet.

Makovsky said he would have preferred that the hard work JINSA put into its proposal were not attached to politicking.

“We don’t want this to be a polarizing issue – a treaty requires 67 votes,” he said. “But that wasn’t our decision. We’re happy that President Trump has indicated his support.”