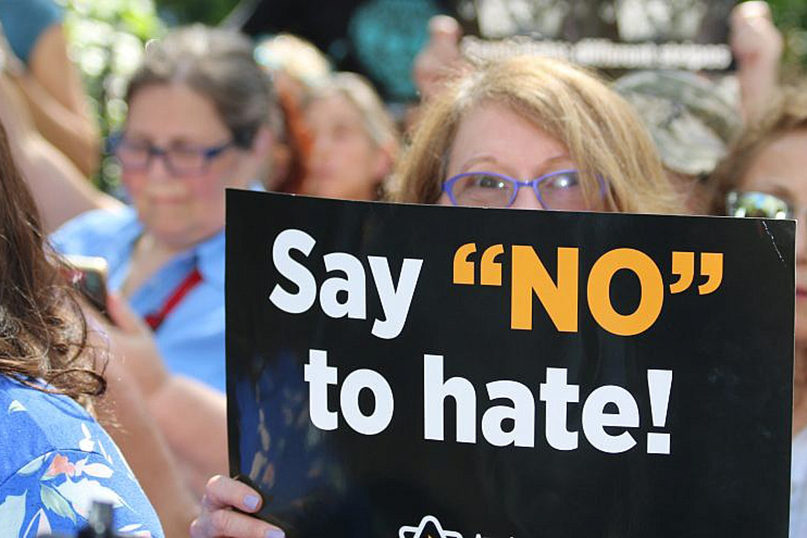 (JNS) Hundreds of demonstrators rallied in front of City Hall in New York on Sunday, Sept. 22, calling on New York City Mayor Bill de Blasio and other municipal leaders, as well as those on the national level, to act against antisemitism and the wave of antisemitic hate crimes taking place against the Orthodox Jewish community. The rally – titled “Name It to Fight It! It’s Antisemitism!” – was organized by WoMen Fight AntiSemitism (WMFA) in coalition with 14 organizations, including The Lawfare Project and Zionist Organization of America.” Protestors held signs that read “We Will Not be Silent #HateStopsHere,” and “Anti-Semitic attacks nearly doubled in NYC in 2019! Where are our elected officials?!” Another sign asked, “Where is [New York City] Mayor de Blasio?” in the fight against anti-Semitism, while one read “A little less conversation, a lot more action.” Demonstrators hailing from New York, Boston and Florida slammed the media, as well as Jewish organizations and elected officials, for not caring enough about the hate crimes committed against Jews.

National Conference of Jewish Affairs spokesman Rabbi Arya Spero said at the rally, “Perhaps our top bureaucrats aren’t willing to face and pinpoint the real problem. He chastised the 35 Jewish members of Congress for not condemning attacks on Jews and criticized politicians, such as U.S. Sen. Chuck Schumer (D-N.Y.) and Rep. Eliot Engel (D-N.Y.), who he said “seem to be choosing their loyalty to the Democrat Party, liberalism and even their careers over the need of the hour regarding Jewish safety.”

Debra Corso, founder of Never Again United and leader of the WMFA Florida chapter, had the idea for the rally and was there on Sunday. “The terrible new wave of antisemitism targeting Jews in New York needed a loud response as opposed to radio silence from media and too many elected officials. As a community, we are facing a convergence of several strains of antisemitism increasingly expressed violently,” she said.

Speaking to JNS after the demonstration, Nissan Jacobs, founder and CEO of WMFA, called New York “a cesspool of antisemitism for three straight years, escalating to the point of our current crisis,” and denounced the head of the Office for the Prevention of Hate Crimes, which opened on Sept. 3 under the leadership of de Blasio, for not attending the rally.

Former New York state assemblyman Dov Hikind called on the mayor to “declare a state of emergency” in New York in regards to its antisemitism crisis and to take action to combat it. He told JNS, “we won’t tolerate it in silence, and we expect the city to do a much better job at securing Jewish neighborhoods.”

Tackling the core issue of antisemitism has to be dealt with on a communal level, he said, “to get to the bottom of what drives so many youths to randomly and wantonly violate identifiable Jews with such senseless violence.” That work, he said, “is on all of us – the Jewish community, as well as the non-Jewish minority communities where these attackers are coming from.”

“The rally was just a step towards taking back our city, so that it doesn’t descend to the depths of antisemitic despair,” said Hikind. “We’re happy to hear that the NYPD will be bolstering their presence in Jewish neighborhoods for the High Holidays, but that’s a Band-Aid, not a cure. We need to find a cure … and quickly.”

Bryan Leib, board member of Americans Against Anti-Semitism, a co-organizer of the rally, told JNS that “all Americans have a responsibility to speak out and demand action from elected officials, law enforcement and community leaders to end antisemitic attacks targeting Jews in NYC and all around the country.”