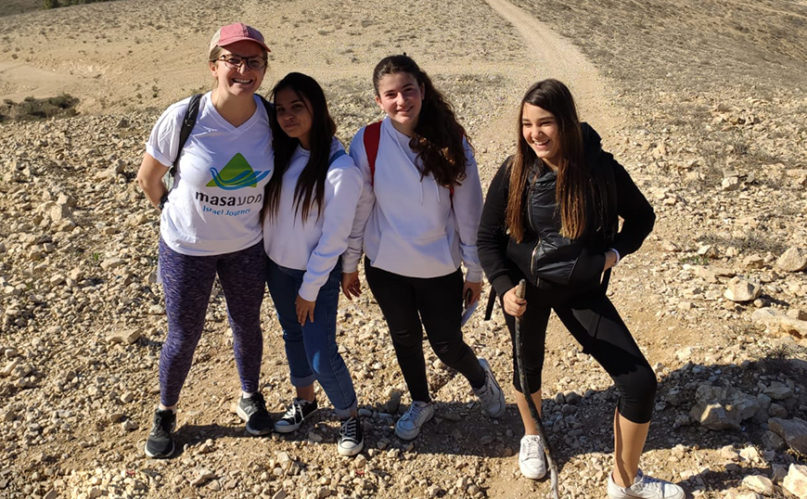 HARTFORD – As Madeleine Chill of West Hartford was entering her last semester at the University of Connecticut, she started thinking about what she wanted to do after graduation. And that didn’t necessarily include getting a 9-to-5 job right out of the gate.

“I really wanted to do some kind of service; something kind of adventuous,” she says.

Chill had spent one college semester abroad studying at the University of Haifa and when a friend told her that she was applying for a Masa Israel Journey fellowship, an immersive educational experience for young adults, it piqued Chill’s interest.

“I missed Israel. I had a really great time and I just felt like I had more to learn and more to think about and more to experience,” says Chill, who spoke with the Ledger from her apartment in Be’ersheva

Chill applied to the Masa program and was accepted. She became a Masa teaching fellow after graduating from UConn last May.

Chill is one of thousands of young adults from the ages of 18-30 from the Jewish Diaspora to participate in Masa, which, according to the program’s website, offers “an authentic, unmediated and challenging journey into Israeli society, culture, politics and history – and acts as the largest pipeline for the Jewish diaspora to access the finest Israeli businesses, social enterprises and academic institutions.”

Masa’s two- to 10-month programs includes volunteer and community service programs, internship and career development programs, undergraduate and graduate academic programs, and gap year programs. Since it was founded in 2004 by the Israeli Prime Minister’s Office and the Jewish Agency, Masa has served more than 120,000 young people from more than 62 countries.

Madeleine Chill, who is in the middle of her 10-month Masa teaching fellowship, says that the program has been a perfect fit for her.

“I am really passionate about language – I studied Spanish as an undergrad. And I love teaching and working with kids. I thought this sounded like a good mix,” she says.

Chill is teaching English in an elementary school in Be’ersheba in southern Israel. She works together with another teaching fellow. The two are supervised by an Israeli teacher.

“We work with tons of kids everyday. There is a lot of energy,” she says. “There’s a lot of noise and fun and negotiation. It’s a very different environment from American schools.”

While Masa offers some Hebrew instruction, Chill said that she has picked up some Hebrew from her Israeli boyfriend and from her young charges.

“Being with the kids is like sink or swim,” she says. “I am teaching them English but you have to [know some Hebrew] if you want to communicate with them to a certain extent. That has been awesome; I have learned a lot from them…They want to tell you about their lives and they want to teach you Hebrew, they come in open and excited and it’s a really special way to learn about a place in a meaningful way.”

Part of the goal of the Masa program is to immerse its participants in Israeli life.

“The idea is really to give you the idea of living as an Israeli,” Chill says. “We live in an apartment in the middle of the city…. Politically it is a really fascinating time to be here because of the elections. There is a lot going on. Beersheba has a huge university so we are in a sort of student-based city with lots of activity and are getting to meet a lot of people.”

Shenkar graduated from Fordham University in May 2019 with a B.S. in integrative neuroscience. She hopes to become a physician assistant.

“Shortly before graduating from Fordham, I decided to take a year to give back to the community and explore my Jewish heritage rather than enrolling in graduate school right away,” she says. “The Masa Israel Teaching Fellowship seemed like a great fit for me because I love working with kids and was hoping to strengthen my connection with Israel. My dad is Israeli and I’ve visited before with my family, but this is the first time I’ve lived in Israel long-0term.”

“I work with 2nd through 6th grade students on strengthening their English skills because in Israel, English proficiency is extremely important in order to pursuing higher education,” Shenkar explains. “I typically work with students in small groups on strengthening their reading, writing, and speaking skills. I really love working with kids in Israel and I’m enjoying the opportunity to live here for a year like a true native.”

Shenkar says she has travelled the country and made friends – both other Masa fellows as well as Israelis.

“My experience as Masa fellow has allowed me to develop invaluable skills that I will hopefully carry with me into the medical field when I return to the U.S.,” she said.

Chill’s program ends in July. When she returns home, she hopes to go to graduate school to study translation or linguistics, something she now feels more prepared to do.

She recommends Masa Israel Journey to other college graduates who are looking for a meaningful way to transition into the “real world.”

“I had a premonition that the transition out of college would probably be a little tough because you go from an environment where expectations of you are structured and you are in a program surrrounded by people your age to just out on your own,” she says. “I thought a good transition would be a year like this where I am in program with other people but I have my independence and making some money – not that we get paid a lot at all but it’s enough to live on. And you have some time to figure it all out.”

Main Photo: Madeleine Chill, left, with three Israeli teens she met during Masa’s Israel Diaspora week, which brought current and past Masa fellows together with Israeli students for a week of activities in December.