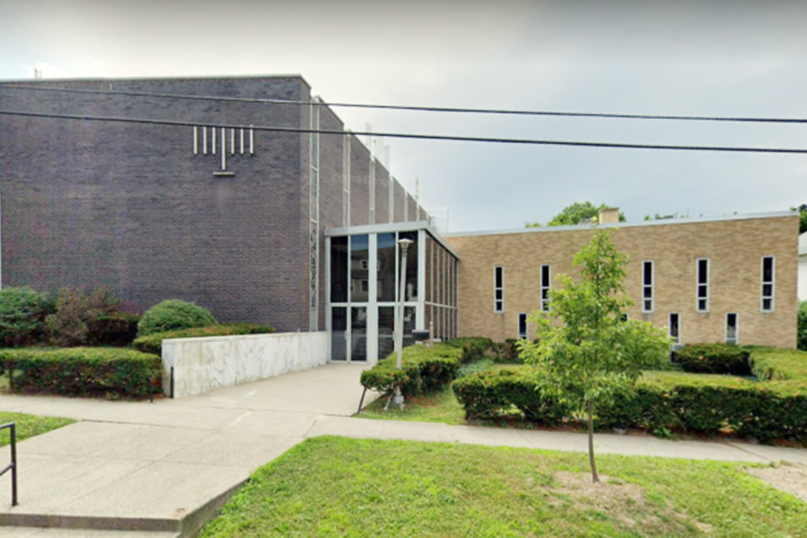 The Westville Synagogue on West Prospect Street was shot at, not by bullets, but by projectiles from a BB gun.

The incident likely occurred some time between April 10 and April 13. The police responded Tuesday, April 14 at noon, when someone associated with the congregation entered the building and reported the damage.

No one was hurt as the building was empty due to the Covid-19 pandemic, with congregants gathering only virtually at home to celebrate the eight-day Passover holiday.

That news initially emerged in the report of Westville District Manager Lt. Elliot Rosa presented Wednesday night at the regular meeting of the Westville/West Hills Community Management Team. That virtual gathering, via the Zoom teleconferencing app, was hosted by the team Co-Chair Josh Van Hoesen.

“One of our synagogues was attacked,” Rosa said in his report. “You may hear that it was ‘shot’ at,” he cautioned. “Yes, but it was [with] BBs.”

Cops have canvassed the neighborhood, speaking to several neighbors about what they had heard or seen in the previous days.

Another neighbor thought the loud noises were not gunfire and so convinced the other witness, which is why the police were not called earlier. Another neighbor heard what they thought was the sound of glass breaking on April 12.

Duff said detectives are also reviewing footage from video from several locations near the synagogue.

One section of footage from Friday afternoon “showed there were some young people teens playing on the street, Friday afternoon early evening, running and playing. About an hour after those teens, someone thought they heard gunfire on an adjacent street, but that was not confirmed … The vandalism is obviously not gunfire.”

There is “nothing to indicate any motivation other than vandalism,” Duff said.

“We’re taking the incident very seriously,” said Rabbi Fred Hyman, the synagogue’s spiritual leader. “And we are planning additional security measures when we reopen” after the pandemic.

Rabbi Hyman also confirmed there were no signs or graffiti of an antisemitic nature. The synagogue has no history of that or any kind of vandalism, he said.

“The police have been very responsive,” he added,

The Westville Shul is an Orthodox synagogue established in the 1950s.

This article is reprint with permission of New Haven Independent (www.newhavenindpendent).