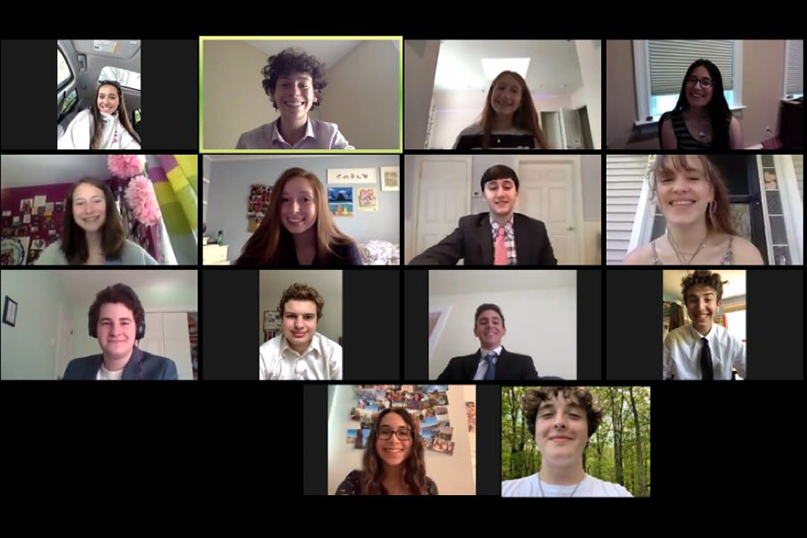 STATEWIDE – Close to 250 teens took part in the BBYO Connecticut Valley Region’s (CVR) first virtual Spring Convention, held the week of May 12 – which meant teens taking part in annual rituals and traditions and engaging with their peers in new and creative ways.

“BBYO has been the one consistent thing in my life during this pandemic, and our connections as a community are stronger than ever,” Sydney Molaver, a member of Chelsea J. Cohen BBYO in Norwalk said. “In theater they say ‘The show must go on!’ and that is exactly what we did, we went virtual and ran a super awesome virtual spring convention where we strengthened our community safely from our homes!”

Said Zac Kitay, AZA (boys) president of the region, “Virtual convention kept me smiling and laughing during the quarantine, it gave me an outlet to be productive and work towards a common goal.”

CVR alumni Brendan George joined the teens to talk about his time on MTV’s “Drag My Dad,” a show in which family members dress in drag and share and discuss personal issues. Brendan shared his story about being Jewish and Queer and also reflected on his time in BBYO.

Sarah Milner, outgoing BBG (girls) regional president said, “Virtual Convention gave me such hope in times of uncertainty.  It gave me a sense of normalcy and community. It really did make quarantine so much easier. I had something to look forward to everyday and was able to see people that I missed and love.”

(1) A project to connect with teens whose b’nai mitzvah were interrupted due to COVID-19. BBYO teens reached out to these teens, saying “mazel too!” with packages of cookies. For each package of cookies that was sent to a bar/bat mitzvah teen, a package of cookies was also sent to Health Care workers in honor of the mitzvoth they perform everyday. The project will continue throughout the summer.

(2) BBYO teens introduced Operation Bubbe Sitters – a project that connects Jewish teens with residents of assisted living homes as a way of reaching out and offering support. The teens sent letters to different Jewish homes in order to begin pen pal relationships with the residents.

The Convention wrapped up with elections for the next group of BBYO leaders. They are: