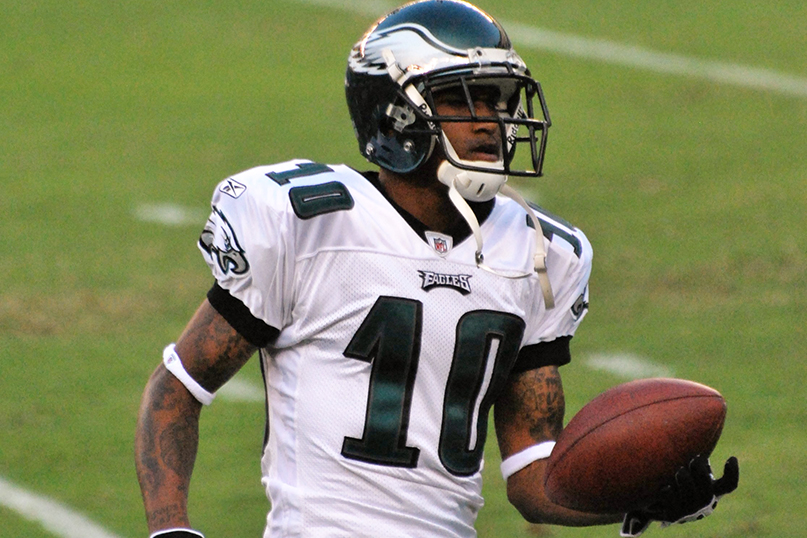 (JNS) Philadelphia Eagles wide receiver DeSean Jackson has been accused of anti-Semitism for promoting a quote falsely attributed to Adolf Hitler and featuring posts praising Nation of Islam leader Louis Farrakhan, who has an extensive history of making anti-Jewish remarks.

On his Instagram story feed, he posted a quote from the book Jerusalem that is falsely attributed to Hitler:

Hitler said, because the white Jews knows that the Negros are the real Children of Israel and to keep Americas secret the Jews will black mail America.

The will extort America, their pan to world domination won’t work if the Negroes know who they were.

The white citizens of America will be terrified to know that all this time they’ve been mistreating and discriminating and lynching Children of Israel.

Jackson, 33, also shared two posts on Instagram – on Saturday and on Monday – praising Farrakhan, both of which have since been deleted.

One caption read: “This man powerful I hope everyone got a chance to watch this !! Don’t be blinded. Know what’s going on.”

He also shared a quote within a picture attributed to Farrakhan, which stated, “There must be 100% change. … There’s a burden the Earth is carrying that it must be relieved from. The Earth is burdened by the wicked living on a planet that was made for the righteous.”

Despite the backlash, Jackson defended his posts, saying they were taken “the wrong way.”

“Anyone who feels I have hate towards the Jewish community took my post the wrong way,” he posted on Instagram. “I have no hatred in my heart toward no one!! Equality. Equality.”

The owner of the team, Jeffrey Lurie, and executive vice president and general manager, Howie Roseman, are Jewish. Neither has publicly commented on Jackson’s posts.

Jackson apologized on Tuesday for promoting a quote falsely attributed to Adolf Hitler.

“I post a lot of things that are sent to me. I do not have hatred towards anyone. I really didn’t realize what this passage was saying. Hitler has caused terrible pain to Jewish people like the pain African-Americans have suffered,” wrote Jackson in a caption of a post that includes a video of him apologizing. “We should be together fighting anti-Semitism and racism. This was a mistake to post this and I truly apologize for posting it and sorry for any hurt I have caused.”

In his apology, Jackson did not mention the Farrakhan posts.

The team said it has spoken with Jackson about the posts and called them “offensive, harmful and absolutely appalling.”

“They have no place in our society, and are not condoned or supported in any way by the organization,” continued the Eagles. “We are disappointed and we reiterated to DeSean the importance of not only apologizing, but also using his platform to take action to promote unity, equality and respect.”

The team noted that it is “continuing to evaluate the circumstances and will take appropriate action.”

Post-pandemic, DeSean Jackson will visit Auschwitz with a Holocaust survivor

Mosberg, who lives in New Jersey and chairs From the Depths, a Holocaust commemoration group, proposed the call following the outcry over Jackson’s antisemitic posts on social media which he later deleted and for which he has apologized.

“I grew up in L.A., and never really spent time with anyone from the Jewish community and didn’t know much about their history,” Jackson said on the call with Mosberg. “This has been such a powerful experience for me to learn and educate myself.”

“Thank you Mr. Mosberg for your valuable time and insight today,” Jackson posted on Instagram after the call, along with a screenshot showing that Mosberg wore a concentration camp uniform on the call. “I’m taking this time to continue with educating myself and bridging the gap between different cultures, communities & religions. LOVE 2 ALL!!!!!”

On the possibility of visiting the former Nazi death camp in Poland, Jackson told Mosberg: “I would be honored to come to Auschwitz and learn from you,” according to From the Depths founder Jonny Daniels, who was on the call.

The visit has not yet been scheduled. While Auschwitz is open to visitors, Americans cannot currently travel to Europe because of the coronavirus pandemic. (Mosberg most recently visited in January for a ceremony marking the 75th anniversary of the camp’s liberation.)

Jackson has also been invited to the United States Holocaust Memorial Museum by Julian Edelman, the New England Patriots receiver who identifies as Jewish and frequently speaks out against anti-Semitism. Edelman said he would also accompany Jackson to the National Museum of African American History and Culture. Both Washington, D.C., museums are currently closed because of the pandemic.

Stephen Jackson talks with rabbi, says ‘I understand the hurt’ over Rothschild comment

(JTA) – Former NBA star Stephen Jackson disavowed hatred against Jews and walked back the inflammatory comments he made earlier in the week suggesting Jews control the banks.

In a conversation with Los Angeles Rabbi David Wolpe livestreamed on Instagram Thursday night, Jackson expressed regret for his comment that the Rothschild family “owns all the banks,” the Forward reported.

“Even with the Rothschilds, I hate saying that,” Jackson said, “because that’s the same type of stereotype as, when you see a black person, [saying] he’s a gangsta.”

Jackson found himself embroiled in controversy earlier this week after coming to the defense of NFL player DeSean Jackson (no relation), who created an uproar of his own after posting a number of tweets over the weekend that “white Jews” work to “blackmail” and “extort” America and that Adolf Hitler “was right.”

Stephen Jackson wrote on Instagram that DeSean Jackson was “speaking the truth.” Then, in an Instagram video discussion with a user whose handle is @kosherwhitewine, Stephen Jackson brought up the Rothschild family, a prominent fixture of anti-Semitic conspiracy theories positing Jewish domination of international finance.

Wolpe told Jackson that Jews remain highly sensitive to references to Hitler and anti-Semitic notions of financial control, saying Jews sometimes react to such comments with hurt and fear.

“I understand the hurt,” Jackson replied. “That’s why I was comfortable initiating an apology. Your hurt and our hurt is no different.”

Pittsburgh Steelers’ Zach Banner says Jews are minority, too, and we must ‘put our arms around them’

In a tweet accompanied by a video, Banner said he does not want to “harp” on the controversy surrounding the recent social media posts of fellow NFLer DeSean Jackson in which the Philadelphia Eagles wide receiver featured antisemitic statements attributed to Adolf Hitler. But, he said, the community can only “progress by educating ourselves. We can’t move forward while allowing ourselves to leave another minority race in the dark.”

Banner, who is of Chamorro and African-American descent, said in the video that he saw Jackson’s apology video and “it seems like his heart is in the right place.” Jackson has deleted the posts, which also encouraged the viewing of Nation of Islam leader Louis Farrakhan’s Fourth of July address that included anti-Jewish rhetoric.

“There’s a common misbelief that among Black and Brown people – and I know this from growing up and I’ve heard it and I’ve listened to it – that Jewish people are just like any other white race,” Banner said. “You mix them up with the rest of the majority and you don’t understand that they are a minority as well.”

He spoke of being in Pittsburgh as a player for the Steelers in 2018 when a gunman entered the Tree of Life synagogue building in the city’s Squirrel Hill neighborhood and opened fire during Shabbat morning services, killing 11.

“I was here on the team … a couple years ago when – it’s just tough man – during the synagogue shooting, in this beautiful city of Pittsburgh,” he said, his voice breaking. “We need to understand that Jewish people deal with the same amount of hate, similar hardships and hard times.

“We need to uplift them and put our arms around them just as much when we talk about the BLM and we talk about elevating ourselves.”

Last Thursday, he changed his Twitter profile picture to the Steelers Stronger than Hate logo created after the Pittsburgh synagogue shooting. In a tweet he called the image “Simple, but strong representation of my squad.”

Banner said that he met Jewish friends while a student at the University of Southern California and some have become like family members.

He has participated in Black Lives Matter protests in Pittsburgh since the death of George Floyd, the Pittsburgh Tribune Review reported.

New York Times writer and editor Bari Weiss, who grew up in Squirrel Hill, tweeted praise for Banner, writing “What a mensch. Thank you, @ZBNFL (And go Steelers!).”

The ADL Philadelphia also thanked Banner in a tweet “for urging us all to be part of the fight against hate in all forms.”

Farrakhan: ‘Jews poisoned me to test whether I’m a man of God’

(MEMRI via JNS) – On July 4, Nation of Islam leader Louis Farrakhan delivered a three-hour speech that was streamed live on the Nation of Islam’s YouTube channel. In the speech, Farrakhan said that Jews had poisoned him with “radiated seed” to test whether he was truly a man of God, and that his survival is proof that he is. He said that prominent Jewish figures such as Alan Dershowitz and Middle East negotiator Jason Greenblatt are Satan, and emphasized that it is his job to expose Satan so that every Muslim picks up a stone against him like they do during the pilgrimage rituals in Mecca.

Farrakhan also said that the reason Jews hate him is because he represents the end of their civilization and because he reveals their wicked ways. In addition, Farrakhan said that he is the one who exposed those who “suck the blood” of the poor. Urging American mayors and governors not to allow their police forces to train in Israel, Farrakhan claimed that Israel is the reason that there are guns, drugs and counterfeit money in black neighborhoods. He added that Israel will suffer from divine retribution and that it will not last long.

“I represent the uncovering of their wickedness, fulfilling the judgement, that God has come to bring down on America and the world,” said Farrakhan.

“So that’s why they hate me, Americans. Because they are wicked and they know they cannot say that I am lying about them. They just say: ‘He is a bigot. He is anti-Semitic,’” he added.

“Israel, let me tell you, your day is here now. You don’t have to applaud. The God of justice has something for you, Israel. You are troubling some waters and you won’t be there long, if God gets after you,” said Farrakhan.