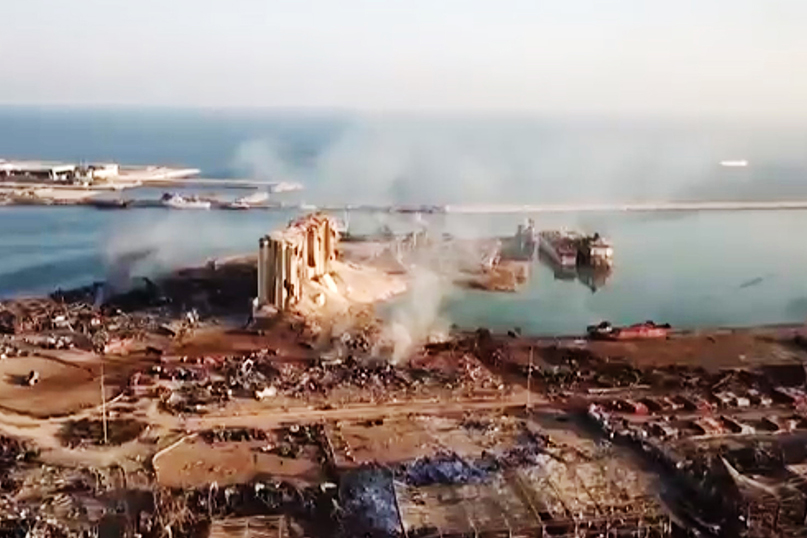 (JNS) A day after Tuesday, August 4, when two enormous blasts ripped through Beirut, flattening the city’s port and causing untold destruction, it was still not possible to grasp the true scope of the calamity, a former Israeli Military Intelligence chief has said.

Speaking by video conference to journalists, Maj. Gen. (res.) Amos Yadlin, who served as former deputy commander of the Israeli Air Force and is now executive director of the Institute for National Security Studies, noted that Israel has offered medical assistance to Lebanon. “This is a terrible, terrible disaster. The big question is how many people are missing. The numbers are between 1,000 to 4,000.”

Analyzing the incidents that led to the explosion, Yadlin said it “started from a small explosion at what looks like a fireworks storage [facility]. And then the big explosion came,” he said, citing the 2,700 tons of reported ammonium nitrate stored at a warehouse at the port’s dock.

Regarding the question of who owned the warehouse and why the material was there, Yadlin said “this is something I guess that the Lebanese authorities are investigating.”

“Very much like his Iranian masters, [Nasrallah] failed operationally.”

He added that it cannot be proven at this stage that it was a Hezbollah warehouse. If, however, signs emerge that this is indeed the case, it would form a “very serious allegation against Hezbollah,” which could turn into significant political pressure on it to end its role as a military power in Lebanon and delegate that role to the official Lebanese military, he assessed.

Maher, the CEO of Radio Sawt Beirut International, told Saudi Arabia’s Al Arabiya on Aug. 5 that the Lebanese Shi’ite terror group uses the country’s ports “and all the other Lebanese government facilities” to acquire weaponry.

Hezbollah had been using the Beirut-Rafic Hariri International Airport for this purpose “for years,” said Maher, as well as the Beirut port.

“Today, nobody but Hezbollah is responsible” for the port blast, said Maher. “The corrupt system that allowed [Hezbollah] to use the Lebanese ports for its own objectives is also responsible,” he added.

The Lebanese political system, said Maher, had given up on confronting Hezbollah, “in order to protect their financial, economic and political gains.”

“Since 2014, it has been forbidden to even say one word to Hezbollah, as if Hezbollah is a religion or a sect not connected to reality or this country,” said Maher.

Those that criticize Hezbollah’s policy are labeled “sectarians,” he added, while anyone that criticizes the group’s acts of terror are “agents,” “terrorists,” “criminals” or “murderers.”

“They banish you from the country, they accuse you of incitement and threaten to kill you,” he said.

Lebanon’s political system, said Maher, had surrendered to Hezbollah, “and unfortunately, today we see the result.”

Earlier this year, the Mossad again tipped off Germany on Hezbollah’s activities on its soil, including warehouses in the south of the country where Hezbollah stashed hundreds of kilograms of ammonium nitrate.

“This is another blow to the Lebanese state that was already [suffering] a huge crisis,” said Yadlin. The factors that created this crisis included severe economic, financial, political and social problems.

Even prior to the blast, tensions were rising in the country. In that context, he explained, “what is important is that Hezbollah is using civilian neighborhoods to store weapons. They use civilian neighborhoods as shields for their activity. There are elements in Lebanon and the international community calling on Hezbollah to stop hiding behind the excuse that it needs these weapons against Israel.”

Nuclear capability and hegemony in the Middle East

Yadlin pointed out that Israel hasn’t attacked Lebanon in 14 years, and that the two countries have “no real dispute” over borders. Even a disagreement over offshore gas-drilling rights in the Mediterranean Sea “was already brokered by the Americans.”

Hezbollah, he said, is looking for excuses to keep the conflict going with Israel. “This is a very good time for Lebanese to tell Hezbollah: ‘We have so many other problems, give us a break from your excuses for Iranian interests that running behind you.’ The issue starts with Iran sending advanced weapons to Hezbollah via Syria.”

“This is another blow to the Lebanese state that was already [suffering] a huge crisis.”

More broadly, the Iranian terror axis of which Hezbollah is part of is under great pressure, said Yadlin. Factors like America’s “maximum pressure” campaign on Tehran–added to economic dysfunction, collapsing oil prices, Israel’s campaign to roll back Iranian military entrenchment in Syria, the coronavirus pandemic, the recent assassination of Quds Force Maj. Gen. Qassem Soleimani–have all contributed to growing discontent among the general populace.

“The Iranians are continuing, despite all of the difficulties, with two strategic efforts: come as close as possible to nuclear capability and to have hegemony in the Middle East,” stated Yadlin.

So far, Iran has failed operationally to deter Israel, and Syria is focused on what remains of its civil war in Idlib, so Hezbollah chief Hassan Nasrallah decided to step up and attempt to “revenge any Israeli activities in Syria if Hezbollah terrorists will be killed as well. This is what happened last week, and Nasrallah decided to act,” he summed up.

Nasrallah attempted to calibrate his actions so that they would on the one hand kill a few Israeli soldiers, but on the other avoid all-out war. “Very much like his Iranian masters, he failed operationally,” said Yadlin.

Now, in the aftermath of the Beirut explosion, Nasrallah has found his excuse to “remove this issue from the agenda, especially if this warehouse was a Hezbollah warehouse,” he said. “And there are already a lot of voices in Lebanon that blame Hezbollah for the financial difficulties. There are new sanctions on Lebanon because of Hezbollah. The banking system is collapsing because of Hezbollah. Every Lebanese knows that Hezbollah is the strongest military power in Lebanon with a lot of political influence.”

With all of these multiple crises in Lebanon, joined by the latest disaster in Beirut, some Lebanese civilians will likely be thinking “why do they need another dimension of destruction that will come from Nasrallah attacking Israel? So I think he will find a ladder to come down from the tree,” said Yadlin.

Asked whether the Beirut disaster will set the stage for the International Monetary Fund to provide major assistance to Lebanon, Yadlin said that remains unclear. “It could on the one hand say, ‘Let’s put aside everything and help Lebanon.’ On the other hand … [the blast] may help those who say Hezbollah is the problem, and that this was a Hezbollah warehouse. The IMF could say ‘until you move Hezbollah away from its positions that they took in Lebanon, we are not helping you despite the disaster.’”

By Lilach Shoval and Ariel Kahana

(Israel Hayom via JNS) Israel has offered Lebanon humanitarian aid following a huge explosion in Beirut on Tuesday that killed at least 78 people and left more than 4,000 injured.

Israeli Prime Minister Benjamin Netanyahu has approved medical and humanitarian aid to Lebanon and has instructed National Security Council head Meir Ben-Shabbat to speak with U.N. envoy Nickolay Mladenov to determine additional ways in which Israel can help, according to a statement by the Prime Minister’s Office.

IDF Lt. Col. Avichay Adraee, head of the Arabic division of the IDF Spokesperson’s Unit, tweeted: “Under instructions from the defense minister and the foreign minister, Israel has reached out to Lebanon via international diplomatic officials and offered the Lebanese government medical humanitarian aid. Israel has much experience in these areas and has proven it by the humanitarian delegations it has sent throughout the world in recent years.”

Adraee echoed Zilberman’s call to “rise above any conflict.”

Israeli President Reuven Rivlin said on Tuesday that Israel “shares the pain of the Lebanese people in this time of disaster and extends its hand to help at this difficult time.”

Meanwhile, Israel is making preparations to take in UNIFIL personnel wounded in the explosion. As of Tuesday evening, the plan was for the wounded U.N. force members to be taken to the border crossing at Rosh Hanikra and treated at Rebecca Sieff Hospital in Tzfat.

Israeli Welfare Minister Itzik Shmuli tweeted: “The heart breaks at the difficult images coming out of Beirut. Our heart is with the Lebanese people at this difficult time and we will do everything we can to help. When tragedies like these happen, even the most tense border cannot make us forget that we’re all human beings.”

As of Tuesday night, Egypt, Jordan, Turkey and Qatar had also offered to provide humanitarian aid to Lebanon.

Main Photo: Drone footage of the aftermath of the explosions in Beirut, Aug. 5, 2020. Source: Screenshot.