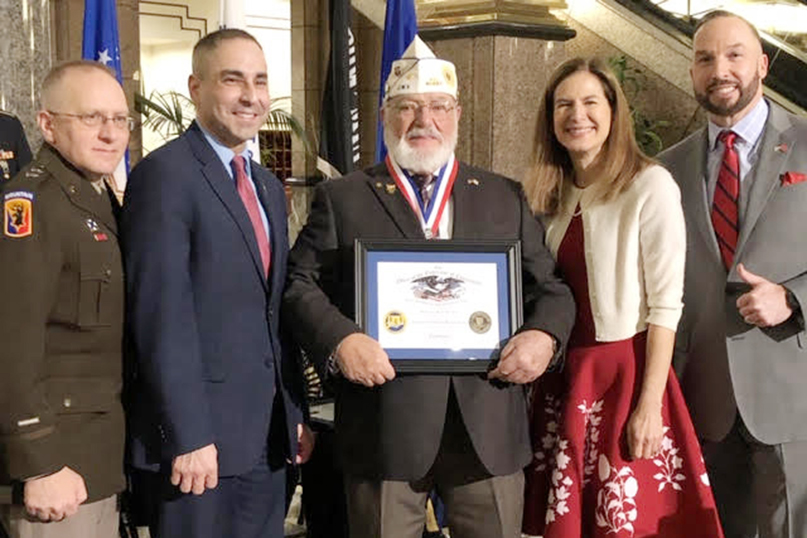 MIDDLETOWN – Last year, at the age of 84, Morty Pear took up kayaking.

This past year, every Thursday morning from May through the end of September, Pear and a group of military veterans kayaked around  Lake Beseck in Middlefield, not just for the fun of it, but as a way to help disabled veterans and those with post-traumatic stress disorder experience the calming, restorative benefits of the water sport.

Lending a helping hand is par for the course for Pear, a founder and charter member of Jewish War Veterans (JWV), Major General Maurice Rose Post #51, who is dedicated to aiding not just veterans but serving the entire community and the state of Connecticut.

Just last December Pear was inducted into the Connecticut Veterans Hall of Fame. As a veteran, the two-term JWV state commander and member of the American Legion Post 75, Middletown, is also a life member and past commander of the Disabled American Veterans Chapter 7. Committed to the well being of his fellow veterans, he helped initiate the Vet to Vet program at Middlesex Hospital Hospice Services and Palliative Care Program, and launched the coffee and danish hour at the Veterans Medical Center in Newington. He helped raise funds to erect a Middletown memorial in honor of all past and future Disabled American Veterans members.

Besides helping vets, Pear has been an active member of the National Ski Patrol for more than 35 years and a medical instructor for the Ski Patrol for 30 of those years. He has served as a medical volunteer for the Special Olympics and in 2016 was inducted into the Special Olympics Hall of Fame in honor of his longtime volunteer service to the games.

So it makes sense that now at 85, Pear’s newest hobby has become another way to help those in need.

Pear first tried kayaking in 2019 when his friend and fellow vetera, Jerry Augustine got him involved with the “U.S. Rowing and Kayaking Foundation” in Middletown.

“It was for veterans suffering from PTSD and disabilities,” Pear explained. “I had never kayaked before. I had canoed, but hadn’t done it in years. I was taken by what they accomplished with the veterans who had problems. They would get out on the water, and it was so peaceful. They would come back in with smiles on their faces.”

When the Middletown chapter of that foundation closed, Pear and Augustine and a few of their friends began their own kayaking program.

Seeking a place where they could continue to kayak, Pear and his friends met a man at one of their regular veterans group breakfasts who invited them to use his property, Rover’s Lodge in Middlefield, which sits on Lake Beseck.

“He’s got a magnificent spot out on the lake. It has everything we needed,” Pear said. “He gave us a room to store our equipment. He has been fantastic to us.”

When getting started, Pear, who is on the veterans committee at the Elks Lodge 771 in Middletown, went to the Elks and asked if they could help support the kayaking program. After contact was made with the national Elk’s organization, Pear and his program received $2,500 in grants. It is now known as the Elks Veteran’s Kayaking Program.

“We bought some more equipment, we used it for food. We serve hotdogs and hamburgers every Thursday. People get there at 10 and kayak until about 11:30. At 11:30 we start serving.

“Some people just come in and fish. One woman comes over and she kayaks and she swims. Everybody gets what they need,” Pear explained. “It’s a family atmosphere. It’s not run like a club or an organization; it’s run like a family. Everybody knows each other and its just amazing. We help each other. It’s so heartwarming.”

The first week at Rover’s Lodge last spring, eight people came to kayak. After that an average of 20 to 25 showed up to kayak and kibitz with Pear and his crew.

During the summer months of Covid, the group was extra careful to wear masks and socially-distance themselves from their fellow kayakers.

Nearly a dozen of the regular attendees are veterans who have disabilities or PTSD from their service to the country.

“What we find is that getting out on the water, they are thinking about absolutely nothing else,” Pear said. “It seems the rhythm of their body, the tranquility of the water, the peacefulness when you are out there on the water – the silence. It just seems to work for the veteran who have difficulties.”

He gave an example of one member of the group who just sat and watched the first time he showed up.

“He did not communicate with a single person,” Pear said. “A week or two later, he got into a kayak and he was off. He went off by himself. By the end of the season he was smiling and [interacting with everyone]. He did a 180 degree turn.”

Born in Hartford, Pear and his family moved to Middletown during his high school years. His father was the owner of Pear’s Kosher Market for many years.  Pear graduated from Middletown High School in 1953 and joined the United States Air Force in 1954 where he served for 25 months before receiving an honorable discharge. After his service in the Air Force was completed, he took over his father’s business in 1956.

When the market for kosher meat in Middletown began drying up, Pear closed it and became a sales representative for a building materials company, and later became a kitchen designer.

Throughout all of those years, he earned recognition for his service to his community. His honors included: “Thank You for your Service” award from the Elks Club #771 of Middletown, Legion of Honor Humanitarian Award from the Chapel of the Four Chaplains in Philadelphia, Community Service Award from the City of Middletown Health Department, Patroller of the Year Award, the Eastern Division Patroller Achievement Award and National Distinguished Service Award from the National Ski Patrol. He has also been an active member of the Middletown Emergency Management Committee, and was presented the Mayor’s Pin in recognition of his vounteer work in dealing with local disasters and emergency situations.

He has also participated in the Stand Down initiative for the last several years at the home and hospital, collecting and distributing clothing and other items to needy vets and their families. While a patient at the Veterans Hospital in West Haven, Pear was presented a “Quilt of Valor” from the staff for work with other patients, while he himself was recuperating from heart surgery.

And his work is not done. Recruiting new members to veterans’ organizations is one of his goals.

“All veterans organizations’ memberships are suffering terribly,” Pear explained. “In the JWV, we are down to probably five members in Middletown. Hartford is losing approximately three to four members a month because all of their members are from the World War II years.

“We just can’t get Jewish veterans to understand that the reason why they have benefits is because of the veterans fighting for these benefits. They need to join an organization – be it the Jewish War Veterans or American Legion – any veteran organization, because we are spokesmen for all veterans in Connecticut.”

Last winter, Pear also traveled to Washington D.C. for the Jewish War Veterans National Meeting and spent a day on Capitol Hill sharing the concerns of local veterans with lawmakers.

He was also one of several veterans’ group commanders who marched on the state capitol to protest cuts that might be made to the U.S. Veterans Hospital in Rocky Hill.

“There was $2 million that was taken away in the budget in the previous year… We heard about another million and a half that was going to be taken from the budget,” Pear recalled. “All of the state commanders got together, and got word out, and we marched on the capital. The budget committee was meeting that day. They came down and told us they were not taking that money away anymore. And it was because of what we did that day. Some of these young people are sitting and letting the older veterans do all the work have got to get involved. Or there will be absolutely no benefits for them down the road.”

On Veterans Day, Wednesday, Nov. 11 at 2:11 p.m., JWB Jewish Chaplains Council, a program of the JCC Association of North America will host the Facebook premier of “The National Jewish Community Celebration of Veterans Day.”  The event will celebrate and honor Jewish veterans, some of whom will share personal stories of their military service.

On Nov. 13 and 14, the Shabbat immediately following Veterans Day, JWB Jewish Chaplains Council, with the Rabbinical Assembly, Cantors Assembly, and USCJ (the rabbinical, cantorial, and congregational arms of the Conservative Movement) is inviting Conservative congregations throughout the US to transform Shabbat Parashat Chayei Sarah (weekly Torah portion) into a “Shabbat of Service to our Country: Honoring Jews of the Military.”

Main Photo: Morty Pear (center) being inducted into the Connecticut Veteran of Hall of Fame in December 2019. With him are (l to r) Maj. Gen. Francis Evon, adjutant general of the Connecticut National Guard; Thomas Saadi, commissioner for the Department of Veterans Affairs; Pear; Connecticut Lt. Gov. Susan Bysiewicz, and WTNH’s Gil Simmons, master of ceremonies.