National Basketball Association teams, fans and analysts seem to be in a constant search for the “next Michael Jordan,” looking for a player to duplicate the feats of the six-time champion and five-time Most Valuable Player many consider the best ever in his sport.
Lior Eliyahu won’t enter that conversation, but the “next Omri Casspi” seems more realistic. The Orlando Magic chose Eliyahu in the second round of the 2006 NBA Draft (44th overall) and subsequently dealt his rights to the Houston Rockets, who wouldn’t grant him a roster spot but wouldn’t waive him, either. While the 6-foot-10, 232-pound forward remained in limbo, he saw the Sacramento Kings choose Casspi in the first round of the 2009 draft and beat him to becoming the first Israeli-born NBA player (Casspi now plays for the Cleveland Cavaliers).

Casspi’s NBA leap was aided by the fact that first-round picks receive guaranteed NBA contracts, while second-round picks like Eliyahu do not. But now, a change of scenery might help Eliyahu’s NBA chances. On June 26, the Rockets traded his NBA rights to the Minnesota Timberwolves.
Joseph Gayer — Eliyahu’s agent in Israel — told JNS.org that although it’s “too early to say what affect this [trade] would have on Lior’s chances to make the NBA,” the development was “good for Lior.”
“I think since Lior was drafted at 2006 we always thought once a good situation comes, he would get his chance,” Gayer wrote in an email to JNS.org. “Unfortunately this hasn’t come yet. Hopefully with his rights traded to Minnesota, we hope it can change things in a positive way.”
Minnesota acquired Eliyahu and forward Chase Budinger for the 18th pick in the June 28 draft. Eliyahu averaged 14.0 points and 6.6 rebounds per game during the 2008-09 Euroleague season, won a Spanish League championship in June 2010, and in September 2010 signed a five-year contract with Maccabi Tel Aviv, where he averaged 11.3 points and 4.1 rebounds per game this past season.
If a $500,000 buyout clause in his Maccabi contract is settled, the 26-year-old Eliyahu can officially leave the Israeli team this summer. NBA teams, according to league rules, can pay up to $500,000 of foreign players’ buyouts, meaning Eliyahu might not have to pay anything out of pocket if offered a contract. However, the ball remains in Minnesota’s court.
“On paper if Minnesota wants to sign Lior and pay the buyout, they should have no problem doing it, but of course it is for them to decide,” Gayer wrote. “I can’t say who would be responsible for the buyout. First we have to wait and see whether Minnesota would make an offer to sign him.”
Gayer explained that while American second-round picks can immediately play in both the NBA’s summer league and veterans camp to try to make a team and secure a minimum-salary contract, overseas second-round picks like Eliyahu have duties with their national teams that prevent them from going to summer leagues. Additionally, these players often have guaranteed contract offers overseas that are several times the size of minimum NBA contracts, Gayer noted.
“I think that for any second-round player to realistically make the NBA the team needs to want him enough to offer a guaranteed contract without going to [veterans] camp,” Gayer wrote. “Players can go to summer leagues, but if they are not offered a guaranteed contract after and teams all around Europe are running after them with [better and guaranteed offers], you can understand why it’s difficult [for the players] to reject it. Many players I know would be willing to make less money to play in the NBA maybe, get that chance, but won’t be willing to give up a guaranteed contract for just a veterans camp invitation or a partially guaranteed contract.”
The day Eliyahu was traded to Minnesota, NBA expert Jonathan Givony of the DraftExpress website reported on Twitter that Eliyahu “will join the Timberwolves for [the] Summer League in Las Vegas,” adding that it sounds like he “has a real chance to make their team.” The Timberwolves, however, have not yet confirmed that Eliyahu will play for them in the summer league.
One potential factor working in Eliyahu’s favor is Minnesota General Manager David Kahn’s affinity for overseas players. If he made the team, Eliyahu would join Spanish point guard Ricky Rubio, Montenegrin center Nikola Pekovic, Serbian center Darko Milicic, and Puerto Rican point guard Jose Juan Barea.
“The fact there are a lot of European players on the [Timberwolves] can definitely help Lior make the team if he gets the chance,” Gayer wrote to JNS.org. “The style of play they are used to is more similar [than Houston’s] to what Lior is used to and fits his skills and playing abilities.” Minnesota’s “Euro-style game,” Gayer explained, involves “a lot of running up and down the court.”
On the other hand, Gayer noted that Minnesota “has a lot of players at [Eliyahu’s] position right now,” perhaps working against the forward’s chances of earning a roster spot.
One thing, however, is clear: Six years after being drafted by the NBA, Eliyahu’s goal remains the same.
“Lior wants to prove himself and show he can play in the NBA,” Gayer wrote. “If Minnesota is interested in him and thinks he has a real chance to be signed this year, he’ll be more than happy to go out there and prove himself.” 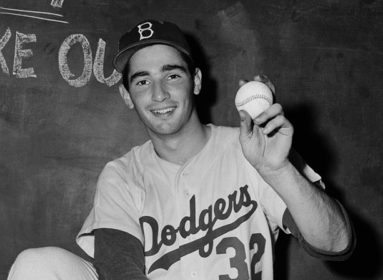 Sandy Koufax statue to be added to Dodger Stadium