Why must Sukkot occur in such close proximity to Rosh Hashanah and Yom Kippur? A fresh analysis of a famous dispute in the Talmud regarding precisely what it is that the sukkah commemorates yields a fascinating answer to this question.

Rabbi Akiva [Tractate Sukka 11b] maintains that we are replicating the actual booths in which our ancestors dwelt during their desert wanderings, while Rabbi Eliezer believes that we are re-creating the miraculous “clouds of glory” which descended from the Almighty as an ethereal protective shield when they left Egypt.

Since our tradition records that the final judgment and absolution of God during this period of repentance is rendered on the seventh day of Sukkot (Hoshana Rabba), it is clear that the sukkah is an intrinsic part of a process of repentance that began with Rosh Hashanah. Hence, even when Rabbi Eliezer and Rabbi Akiva disagree as to the identity of the “booths” themselves, perhaps they are also distinguishing between two different aspects of the repentance process.

Indeed, the Zohar speaks of two forms of repentance: a lower repentance (teshuva tata’a) which is for a specific transgression or group of transgressions, and a higher repentance (teshuva ila’a) which is an uplifting of the entire personality, a total ennobling of one’s direction in life. I would suggest that Rabbi Akiva’s sukkah, reminiscent of the flimsy desert structures, is linked to the lower form of repentance, and Rabbi Eliezer’s “clouds of glory” sukkah is linked to the higher form of repentance. Ultimately, we need both of them!

A friend of God! The highest achievement of repentance. What do friends do? One way to express delight and closeness with a beloved friend is to invite him into your home. In a sense, this is what happens on Sukkot. During Yom Kippur, we were all in the presence of God (lifnei Hashem) like angels in heaven. But on Sukkot our presence before God is extended by His making our home and His home the very same home. All through the months of Elul and Tishrei, we add the 27th Psalm to the prayer service, which includes the following verse: “One thing have I desired of the Lord …that I may dwell in the house of the Lord all the days of my life…” [Ps. 27:1]

Finally, on Sukkot our desires are answered. In effect, God is the bridegroom, and we, the Jewish people, are the bride called upon to enter the bridegroom’s home. The seven days we sit inside the sukkah correspond to the seven days that a marriage is celebrated. Since no ‘Sheva Brachot’ is complete without new faces at each of the seven festive meals, we also invite into our sukkah new faces for the duration of the seven days: Abraham, Isaac, Jacob, Moses, Aaron, Joseph and David, and the custom is called ushpizin.

Perhaps we must first seek forgiveness for our individual transgressions and lovingly accept the exile of the sukkah of Rabbi Akiva before we can enter the marriage chamber of the glorious sukkah of Rabbi Eliezer. How fortunate are we that the one naturally turns into the other as we reach upwards in our relationship to the Divine. 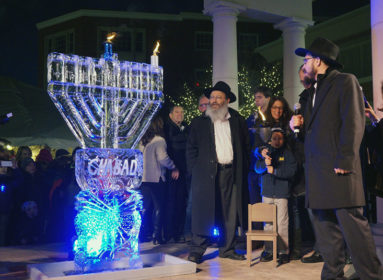