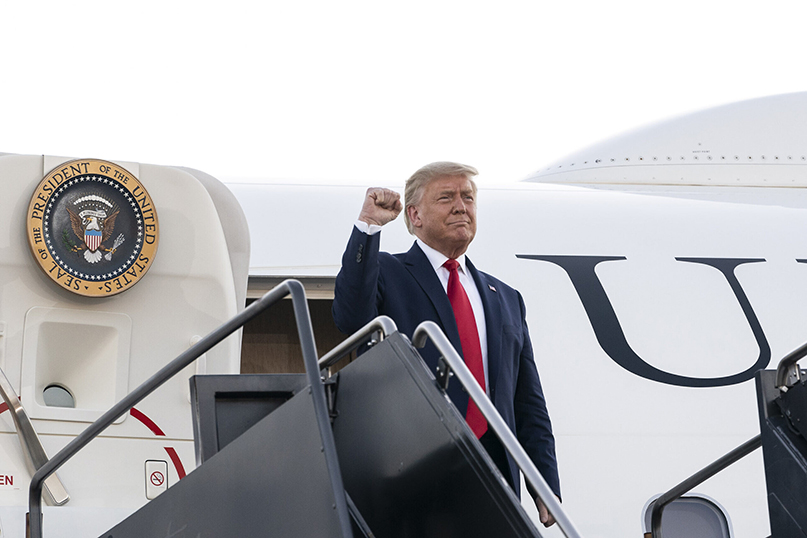 (JNS) The re-election campaign of U.S. President Donald Trump launched a new initiative on Wednesday to target Jewish voters ahead of the Nov. 3 elections.

The board of the “Jewish Voices for Trump” coalition will be co-chaired by philanthropists and Republican donors Sheldon and Miriam Adelson, businessman Wayne Berman, Julie Strauss Levin, an attorney and wife of prominent conservative radio host Mark Levin, and Boris Epshteyn, a strategic adviser for the Trump campaign and co-chair of the group.

Other board members include former special envoy to the Middle East Jason Greenblatt; New York-based hedge-fund manager Sander Gerber, who was instrumental in the passage of the Taylor Force Act; Yechezkel Moskowitz, president of the Chovevei Tzion Movement; and Haim Chera, son of the late Syrian-Jewish leader and real estate developer Stanley Chera, who was a close friend of the president’s.

The coalition will work to underscore the significance of the Trump administration’s pro-Israel and pro-Jewish policies, according to the Trump campaign.

Key issues of focus include the U.S.-Israel relationship, the December 2017 recognition of Jerusalem as Israel’s capital and moving the U.S. embassy there five months later; combating antisemitism at home and abroad; advocating for Middle East peace and protecting America’s interests abroad; rebuilding an empowering economy; and protecting the American worker from unfair trade practices.

“President Trump is a champion of the Jewish people and the greatest ally the State of Israel has ever had,” Epshteyn told JNS. “President Trump has fought against antisemitism in America and throughout the world while continuing to ensure the long-term success and security of the Jewish state.”

“From moving the U.S. embassy in Israel to Jerusalem to recognizing Jerusalem as the capital of Israel, to tearing up the disastrous Iran nuclear deal negotiated by the Obama-Biden administration, to signing the historic Abraham Accords, President Trump’s record on Israel and the Middle East can be summed up in four words: Promises Made, Promises Kept. Today’s extremist Democrats are electing antisemites into Congress and inviting them to speak at their national convention,” he said.

“President Trump’s pursues peace between Israel and the Arab world is based on this reality: A lasting peace can only [be] achieved by the community of nations respecting Israel’s right to exist in the historical homeland of the Jewish people,” Joel Griffith, a Jewish Trump voter, told JNS. “This peace for peace enhances the prospects of security and prospect both for Israel and the entirety of the Mideast.”

Under Israel-friendly Ashton Carter, no major shift expected at Pentagon