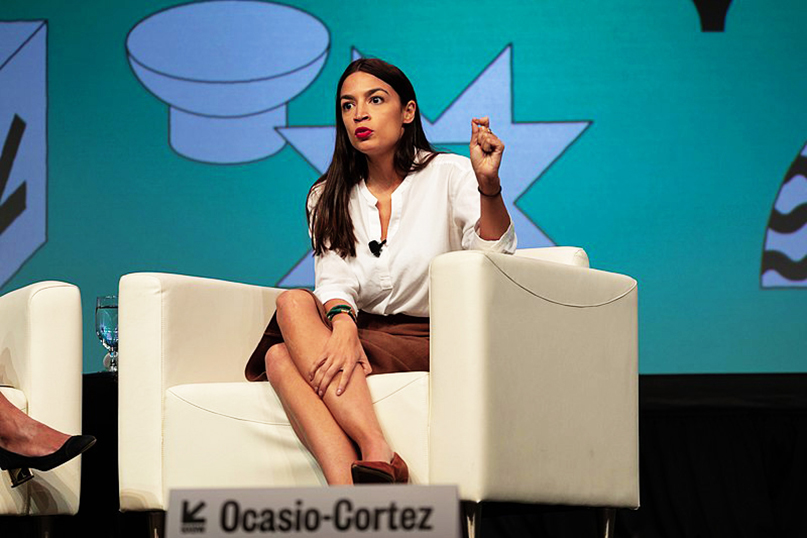 (JNS) In the world of politics, celebrity and name recognition is priceless, so in that sense, Rep. Alexandria Ocasio-Cortez (D-N.Y.) is among the richest members of Congress. In two years, the freshman went from being an unknown to being one of the most consequential members of the U.S. House of Representatives.

It’s true that as a newcomer, her influence on Capitol Hill with respect to advancing or blocking legislation is minimal. But in an era when Beltway gridlock has made the passage of landmark bills rare, AOC (as she is commonly known) has a different kind of influence that in many respects is far more consequential. That is why pro-Israel Democrats who hoped to make common cause with her were dealt a devastating blow this past week.

By accepting and then rejecting an invitation to appear at a virtual event hosted by Americans for Peace Now that honored the memory of Yitzhak Rabin, AOC sent a loud message to Jews who hoped that the increasingly influential activist wing of their party could be persuaded to line up with the Israeli left. If, as many claim, Ocasio-Cortez represents the future of the Democratic Party, then that is a future in which it will be aligned with the BDS movement and opposed even to Israelis who cling to forlorn hopes for a two-state solution.

AOC came into the House as just the most prominent member of “The Squad.” The quartet of four young radicals who burst onto the scene in 2018 is composed of Ocasio-Cortez, and Reps. Ilhan Omar (D-Minn.), Rashida Tlaib (D-Mich.) and Ayanna Pressley (D-Mass.). While they have all managed to seize far more attention than would normally be possible for House backbenchers, AOC has become a pop-culture icon with a national following.

Establishment Democrats may still try to dismiss her significance. But the results of the 2020 primaries illustrated that AOC is a political powerhouse whose endorsements proved decisive in key races. It was her intervention on behalf of aging incumbent Sen. Edward Markey (D-Mass.), who had co-sponsored a radical “Green New Deal” program with the congresswoman that galvanized his campaign and easily fended off a challenge from the seemingly more popular and better-funded Rep. Joseph Kennedy III. AOC also helped make the difference in ensuring the primary defeat of Rep. Eliot Engel (D-N.Y.), the chairman of the House Foreign Relations Committee, as well as one of the most stalwart defenders of the state of Israel in the House.

With respect to Israel, liberal Democrats assumed that AOC was willing to stake out a different position than her buddies. Omar and Tlaib are the only members of Congress who support the anti-Semitic BDS movement. They had hoped to take AOC with them on a tour of “Palestine” that was canceled by the Israeli government’s refusal to grant them entry. Yet Ocasio-Cortez had never explicitly endorsed BDS. But the kerfuffle over the Rabin commemoration makes it clear that her sympathies are very much in sync with that of the anti-Israel movement.

Americans for Peace Now once represented a growing demographic of Jews who sympathized with Israelis who backed the peace process with the Palestinians. In the last decade, it has been supplanted by J Street, as well as by groups like Jewish Voices for Peace and IfNotNow, which brazenly oppose Zionism. Nevertheless, for the first time in a very long time, Peace Now made news last week.

AOC initially accepted the group’s invitation to help honor Rabin. However, once that became known, she received an avalanche of criticism from her allies on the intersectional left and immediately backed down. She later claimed that her hosts had misrepresented the nature of the event and withdrew from it.

To the party’s activist base, anything associated with Israel–even a program dedicated to the memory of a man who was assassinated by a right-wing extremist because of his efforts to make peace–is beyond the pale.

BDS supporters smear Rabin, who received a Nobel Peace Prize for signing the Oslo Accords in 1993, as a war criminal because of his service during Israel’s 1948 War of Independence and as Minister of Defense during the First Intifada, when he is supposed to have urged the troops under his command to “break the bones” of those Palestinians committing violence.

Arguments about Rabin’s record are beside the point. Those who, like “The Squad” and their fellow travelers on the left, believe in intersectional canards about the Palestinian war on the Jewish state being morally equivalent to the struggle for civil rights in the United States see all Israelis as alike. If they think the one Jewish state on the planet has a right to exist or defend itself, in the eyes of the BDS movement, they are evil oppressors exercising “white privilege” over “indigenous people,” even if they are persons of color who are indigenous to the land of Israel.

AOC is someone who, as we have repeatedly seen these last two years, doesn’t blink an eye about defying House Speaker Nancy Pelosi or Democratic presidential nominee Joe Biden. That she thought it necessary to acquiesce to the demands of a Twitter mob–led in this instance by an anti-Zionist writer for the far-left Jewish Currents publication–speaks volumes not only about her ideology, but about the disciplined nature of the intersectional left when it comes to policing its adherents with respect to Israel. Her overt snub of liberal Jews sends a loud message that there is no place for them in the party base if they are not willing to renounce support for Israel’s right to exist.

This is yet another wake-up call for Jewish Democrats who may think Biden’s defeat of AOC ally Sen. Bernie Sanders (I-Vt.), ensured that their party is going to remain solidly in the pro-Israel camp. AOC and her allies can no longer be dismissed as noisy non-entities. Unless and until they are explicitly repudiated by Biden, rather than appeased and coddled, they can be forgiven for thinking the future of the Democratic Party belongs to them.