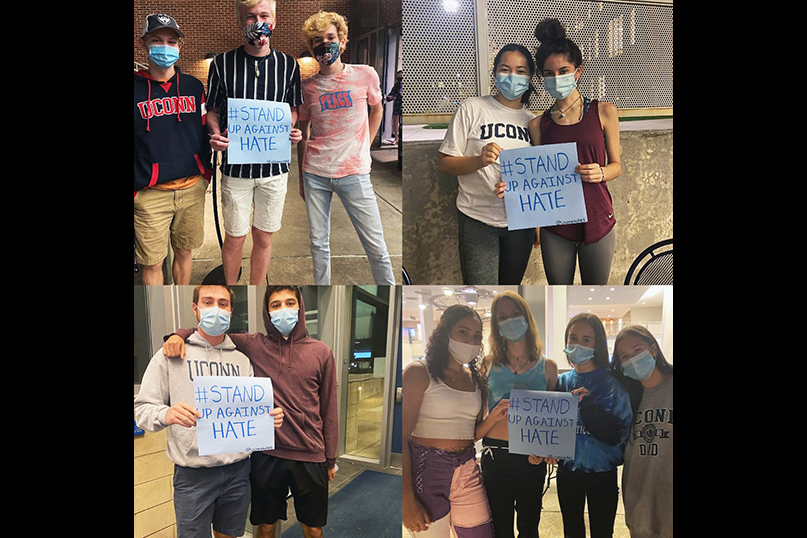 STORRS – Three separate antisemitic incidents occurred in the month of October in a University of Connecticut residential complex in Storrs.

On Oct. 7, “The Third Reich” was written on a white board affixed to the door of a student’s dorm room. Later in the month, in the same building, a student reported seeing a swastika carved on a wall near an elevator in the same building. And, lastly, Chanukah and Kwanzaa decorations were vandalized on a holiday display bulletin board in the same complex.

The acts of vandalism were investigated by the police, but so far no suspects have been identified.

In response to the incidents, the office of Residential Life worked closely with the students personally affected, and a discussion on antisemitism was held in the residential building where the vandalism took place.

UConn Hillel began a #StandingUpAgainstHate campaign in which Hillel members spoke about their own experiences with antisemitism and provided education to fellow students about antisemitism and how to combat it.

Still, while UConn’s administration did have some communication with members of Hillel following the incidents, administrators did not condemn, nor address the antisemitic acts with the entire student body.

On Oct. 25, UConn Hillel students launched a petition to address that oversight, which resulted in a letter signed by 311 students that was then sent to the office of UConn President Thomas Katsouleas.

“As a Jewish community, we are left wondering why these actions have not warranted the same response,” the Hillel letter concluded.

“The UConn administration that so adamantly, and appropriately, addresses and condemns hate towards other communities on campus needs to equally address and condemn the hate towards UConn’s Jewish community,” said the letter, asking Katsouleas and other administrators to condemn the antisemitism and share details with of the entire UConn community.

On Oct. 30, Katsouleas, Tuitt, and Provost and Executive Vice President for Academic Affairs Carl Lejuez sent a letter to the entire campus community.

“These recent reports were all acts of physical damage to property, including swastika graffiti. These are undeniable symbols of antisemitism that elicit painful reminders of the Holocaust among our Jewish students, faculty, and staff. These acts and other discriminatory acts this semester are deeply upsetting and leave a scar on members of our community whose beliefs or identities are targeted.”

“They initiated legislation to strengthen the university’s anti-bias policy and to  adopt the International Holocaust Remembrance Alliance’s definition of antisemitism as an institution,” Hillel Director Edina Oestreicher told the Ledger.

The legislation was passed by the full student government on Wednesday, Nov. 11. It will now head to senior UConn administrators.

“I’m feeling really hopeful and inspired by students and that all they did,” Oestreicher added. “[UConn’s student government] initiated it, they wrote the legislation, they moved it forward very quickly and felt very strongly that the university needs to take a stronger stand. And this was coming from non-Jewish students so it’s really heartening to have allies across campus, particularly in leadership roles in student government.”

Hillel is now working with the office of Residential Life and the Dean of Students’ office, as well as the Anti-Defamation League, to create a student panel program on antisemitism to be held the week of Nov. 30.

“I think the theme of it is really going to be to help students understand the impact of antisemitism – what it’s like to be a victim. Then we’re going to go from there to helping students understand their rights and responsibilities; how not to be a bystander, but to stand up and report things and be there as allies for their peers,” Oestreicher said.

Hillel is also working with the Office of Residential Life to provide training to student residential advisors (RAs) and professionals on how to handle antisemitism and antisemitic acts in student residences. Training is expected to begin in January.

Oestreicher praised the students involved in Hillel and UConn’s student government for their response to the acts of antisemitism at their university.

“Obviously this has been very unfortunate but I tend to look at the silver lining in all of this and I have been very heartened by the student activism,” she said. “They took the lead in communicating with the president and prompting him to respond in the petition, and in writing this legislation. Seeing students take an active role in wanting to create a more inclusive community is really inspiring to me, not just as a Jew but as an administrator.

“I think there will be stronger policies and protocols as a result to this, and that’s a good thing for our community. I also  believe we’re going to be able to have more opportunities to do training and education for professionals and for students. And there is strengthening of relationship between Hillel students and senior administrators that didn’t exist before. The stronger relationship and greater understanding of Jewish students on campus and their experiences is a really positive thing.

“Looking at the long view,” she concluded, “I do think there’s some good things that will come out of these challenging times.”

Photos: On Nov. 9, the 82nd anniversary of the beginning of Kristallnacht – and in light of recent acts of antisemitism at UConn – members of UConn Hillel walked around the university’s student union to talk with fellow students about antsemitism. (Courtesy UConn Hillel) 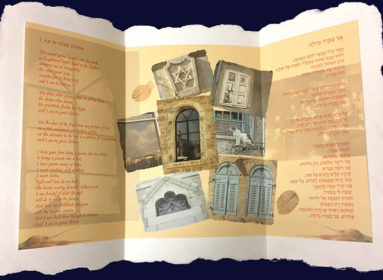