Abraham L. (Al) Schenker, formerly of New York City and Danbury, died on Nov. 8 in Reston, Va. He was 98.
Born in 1911 and raised on the Lower East Side of Manhattan, Schenker spent 30 years after retiring in Lake Waubeeka, a summer community in Danbury founded in the early 1950s by Jewish firefighters from New York City.
He worked many manual jobs throughout his life, says daughter Barbara Sontz, but his proudest achievements were as a builder. In the mid-‘50s, he helped build small bungalows for some of the original founders of Lake Waubeeka. Schenker and three of his four brothers helped build the community’s small synagogue, Congregation Mount Moses.
In the ‘50s and ‘60s, during summers and on Jewish holidays, some 50 members of the extended Schenker family lived in Lake Waubeeka. Al and his wife Ida purchased land there in the mid-‘60s, and Al would commute on weekends from the family home in the Bronx to build a home, large enough to accommodate family visits, where he and Ida retired in the early ‘80s.
“Mom and Dad were active members of the Lake Waubeeka community,” says Sontz. “They had lots of friends who were among the generation of the original founders; some came just for the summer, some lived there all year ‘round. They participated in activities at the Jewish Federation in Danbury, and Mom would host an annual fund-raising luncheon for Federation each summer. Dad and his brother Barney helped clean the shul and to keep it in good repair, and Dad became the Saturday-afternoon Kiddush-maker for many years. He took special delight in an envelope he received addressed to ‘Rabbi Abraham Schenker, Congregation Mount Moses.’”
Mac Koven, a member of the community and a former art director, designed a series of plaques representing the Twelve Tribes of Israel. Schenker created the plaques on his jigsaw and Koven painted and inscribed them. The plaques still hang in Congregation Mount Moses.
“The five Schenker brothers were very proud to be Kohanim,” says Sontz. “They were also all very tall and had tall sons. So, on Rosh Hashanah, when the Priestly Blessings were given, there were some very big men duchening.” 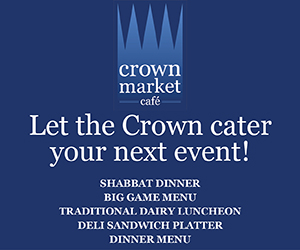