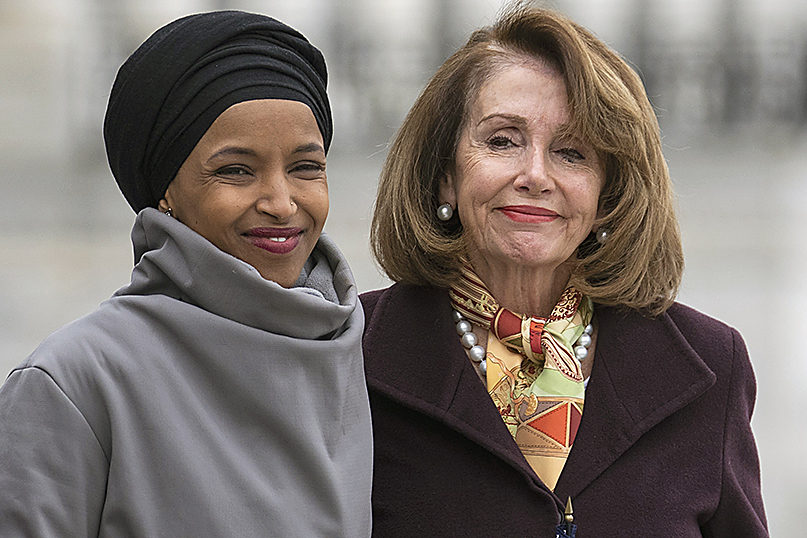 WASHINGTON (JTA) – Democrats came to an agreement on a resolution to denounce antisemitism and other forms of bias, but few – particularly the House speaker, Nancy Pelosi – seemed especially satisfied.

The controversy over Rep. Ilhan Omar – the Minnesota freshman whom critics say has dabbled in antisemitism, and who supporters say is paying the price for criticizing Israel – has roiled the party, and already pulled into the fray some of the major presidential wannabes.

The House resolution that passed 407-23 on Thursday March 7, forcefully denounces the “dual loyalty” species of antisemitism that Omar has peddled – although it didn’t use her name. It also tweaks Republicans by denouncing the brand of bias critics most closely identify with President Donald Trump – Islamophobia – and taking aim at the white supremacists who have declared themselves his supporters.

At her weekly news conference, fielding complaints that the resolution should have focused solely on antisemitism, Pelosi said she had spoken with Omar and explained why her remarks about refusing to pledge “allegiance” to Israel were hurtful to Jews and others, in that they suggest that supporters of Israel are more loyal to a foreign country than their own.

But Pelosi made clear that Omar Just. Didn’t. Get. It.

“I don’t think that the congresswoman perhaps appreciates the full weight of how it was heard by other people, although I don’t believe it was intended in an antisemitic way,” said a subdued Pelosi, announcing that the revised resolution would come to the floor the same day.

In other words, this issue isn’t going away. Here are some reasons why:

Omar is feeling emboldened: The 37-year-old lawmaker has twice apologized for peddling two other antisemitic tropes – that Israel had “hypnotized” the world and that lawmakers backed Israel only in exchange for campaign donations. She’s not apologizing this time. Instead, Omar is having a Twitter battle with veteran Jewish colleagues like Rep. Nita Lowey, D-N.Y., the chairwoman of the House Appropriations Committee.

Omar has friends: A gross Islamophobic attack on Omar at a West Virginia GOP event (an attack denounced by Republicans) that coincided with her “allegiance” controversy drew plenty of sympathy from colleagues, who may already feel protective of the newcomer and path-breaker – she’s the first Somali refugee and one of two Muslim women in Congress.

The party’s progressive and black caucuses rallied to her side, saying she was being single out as a woman of color and a critic of Israel. The House whip, James Clyburn of South Carolina, went so far as to suggest that Omar’s sense of hurt is more “personal” because she is an actual refugee – unlike, say, the descendants of Holocaust survivors or Japanese Americans interned during World War II. That prompted a rebuke from the Anti-Defamation League.

“The Holocaust was a singular tragedy resulting in the death of six million Jews,” ADL said on Twitter. “It’s offensive to diminish the suffering of survivors and the continuing pain of Jews today.”

Clyburn walked back his comments Thursday, but in his struggle to both support Omar and appease her critics one could see the tough job ahead of him as the party’s consensus builder.

Some of those friends are in high places: Four Democratic presidential candidates, Sens. Kamala Harris of California, Kirsten Gillibrand of New York, Bernie Sanders of Vermont and Elizabeth Warren of Massachusetts, have issued statements on the controversy. Harris, Sanders and Warren cast Omar as a victim, while only Gillibrand chided her for employing “antisemitic tropes.”

Sanders and Warren, additionally, said Omar was being targeted for her tough posture on Israel, although only one Democrat, Juan Vargas of California, had mentioned Israel policy – caucus criticisms of Omar focused entirely on the antisemitic tropes. “None demanded any accountability from Omar,” the Forward’s Batya Ungar-Sargon said of Harris, Sanders and Warren. “All misconstrued her words as being legitimate criticism of Israel, when what they actually did was misconstrue the U.S.-Israel relationship … in ways that evoked antisemitic canards.

“All of these statements were clearly pandering to a progressive audience willing to overlook antisemitism from one of their own.”

Jews are not happy. Reports that Democrats were revising the resolution to include other forms of bias led to concern that the message would be diluted.

“I don’t want to see this all-lives-mattered,” ADL CEO Jonathan Greenblatt said on CNN before the resolution was published – referring to attempts by white critics to defuse the Black Lives Matter movement.

“When a colleague invokes antisemitic lies three times, then this body must condemn antisemitism,” Deutch said. “Antisemitism is worthy of being condemned on its own.”

Rep. Elaine Luria of Virginia noted her own background as U.S. Navy officer on the House floor to explain why suggestions of dual loyalty are so hurtful to Jews like her.

“Mr. Speaker, am I to look back on my military career and the sacrifices it meant for my family and remain silent in the face of people questioning my loyalty to my country?” she said. “I believe that I speak clearly for all fellow Jewish veterans that this echoes of language that has been used to marginalize and persecute the Jewish people for centuries.”

The text of the actual resolution is less diffuse than critics warranted: Its focus is on antisemitism, with an emphasis on the dual loyalty canard invoked by Omar, and the rest is mostly about Islamophobia.

“The message of the condemnation of antisemitism will be very clear,” Halie Soifer, who directs the Jewish Democratic Council of America, told me.

The timing isn’t great: The tussle comes just weeks before the American Israel Public Affairs Committee annual policy conference, expected to draw 18,000 activists to Washington. AIPAC will emphasize bipartisanship and demand no booing from attendants; that might get observed in the breach. Israeli Prime Minister Benjamin Netanyahu is likely to attend in person, and will meet with President Donald Trump, who is likely to seize the opportunity to present himself as the savior of the Jews. He has already taken aim at Democrats on Twitter, and told reporters Friday, March 8, “I thought yesterday’s vote by the House was disgraceful because it’s become, the Democrats have become an anti-Israel party, they’ve become an anti-Jewish party.”

And not just Trump: Republicans naturally are making hay of splits within a Democratic caucus that until now had scored impressive victories, including forcing Trump to back down from a government shutdown.

“I took for granted as a result House Democrats would at least, at least make good on their plan to symbolically condemn antisemitism,” Sen. Mitch McConnell, the majority leader in the Senate, sneered on the Senate floor. “I at least assumed a few pages of symbolism was not too much to ask.”

And Rep. Lee Zeldin of New York, one of two Jewish Republicans in the House, accused the Democrats of hypocrisy.

“[W]e can’t come here and just emphatically, solely, forcefully condemn antisemitism and name names,” he said. “But if it was a Republican, we would.”

A version of this post first appeared in The Tell, Ron Kampeas’ weekly newsletter on Jewish news from Washington.

Get healthy at your JCC