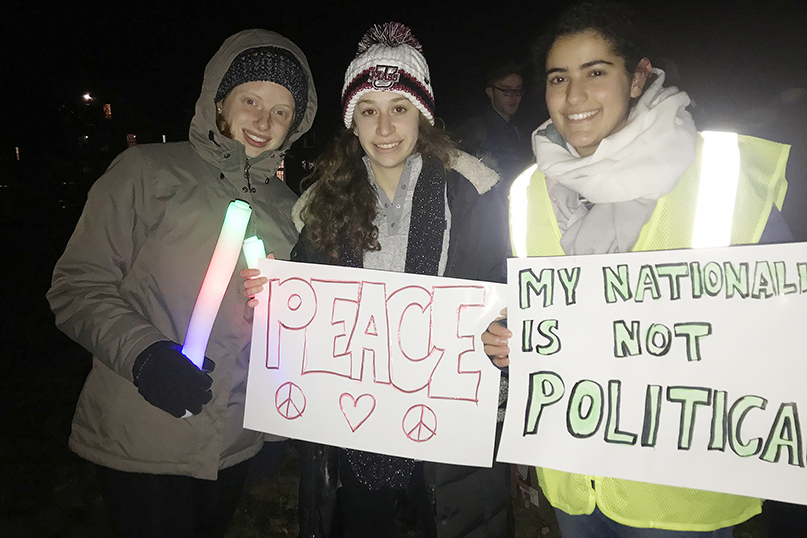 AMHERST, Mass. – More than 100 students, parents and supporters carrying Israeli flags and signs with messages like “Peace” and “Israel Has the Right to Exist – Ask Me Why,” marched from Kendrick Park in Amherst, Massachusetts to the campus of the University of Massachusetts on Tuesday evening, Nov. 12 as part of an event called “End Polarization-Promote Peace.”

The march was in response to another event held at UMass that evening – the second pro-Boycott, Divestment and Sanction (BDS) event targeting Israel to be held this year at the university.

The 20-minute “End Polarization” march took its participants past the Fine Arts Center where the BDS panel was being held, and ended at the university’s Newman Catholic Center, where more activities were planned.

Stephanie Margolis, president of Student Alliance for Israel (SAFI), helped to organize the march, along with UMass Hillel and numerous students who are not members of campus organizations but wanted to promote peace.

“We just kind of came together as a collective and said, ‘We want to do something to show an alternative message,’” Margolis said. “We felt uncomfortable about the [pro-BDS] event that was going on here,” she said. “This is less of an organizational effort, whereas, it’s more students coming together that aren’t always involved.”

More than two dozen people came to Amherst by bus from the Boston area, courtesy of the Israeli American Council (IAC); some drove from other towns to be a part of the march and community gathering.

“We came with a group of students, community members, parents, alums, that were deeply disturbed about this event and another event that was held here in May,” said Karen Bar-Or, IAC Activism Manager. “So we decided, along with many other organizations, and of course with Hillel, the Israel fellow and the amazing students here, that we were going to promote another event that was all about peace and dialogue.

“This is not students going [to the BDS event] and protesting. It’s students making their voices heard and showing their stance and their love for Israel but also showing that the other side of pro-Israel is not anti-Palestinian,” Bar-Or continued. “You can be both, you can love Israel and you can want to defend it, and you can also be sympathetic to the Palestinian cause and want the best for the Palestinian people.”

Peggy Shukur, senior associate regional director of the New England office of the Anti-Defamation League, was the ADL’s representative at the event.

“We’re happy to support the students in their efforts to actually promote some good dialogue,” Shukur said.

Regarding the BDS panel held that evening, Shukur stated, “It’s a public institution… and as an academic institution it is very important to follow principles of academic freedom. But at the same time, they are using the space for speech that is really polarizing and divisive and makes Jewish students feel uncomfortable on this campus.”

Once inside the Newman Center, around 200 participants gathered to listen to speakers, learn about organizations like One Voice On Campus, which strives to build partnerships through dialogue via its “Israel & Palestine 101” program, and Healing Across the Divide, a group that promotes peace through improved healthcare for Palestinians and Israelis.

Mordechai Kamel, a representative of Healing Across the Divides, praised the UMass students at the event for promoting peace.

“I think it’s important that young people realize that there are other avenues besides government to government for people making peace,” Kamel said. “I think it’s great for anyone to realize that civil society can still work, especially in our current state of affairs in the United States.”

In one corner of the room, a group of students sat in a “conversation circle” holding an open dialogue about their experiences on campus and the Israeli-Palestinian conflict. In another area, airbrush-paint artists created personalized t-shirts for students with words like “Shalom” written in Hebrew.

“We are all here tonight to say that it is up to all of us to create a middle ground,” said Rabbi Aaron Fine, executive director of UMass Hillel. “A ground on which the inherent worth of every human being is valued – to affirm the humanity of both Palestinian and Israeli.”

In his remarks to the crowd, Fine said that that evening’s BDS event was one example of “a series of polemic events” that have been held at the UMass campus in the past few years.

Just last May 4, another pro-BDS event, “Not Backing Down: Israel, Free Speech, and the Battle for Palestinian Human Rights,” was held at UMass, sponsored by the department of communication; the department of women, gender and sexuality studies; and the Resistance Studies Initiative.

Before that event, 80 members of organizations, including the Jewish Federation of Western Mass. and its Community Relations Council, sent a letter to UMass Chancellor Kumble Subbaswamy, asking that he “rescind all university sponsorship” of what they called a “political event and faculty misconduct.”

At that event, Fine said, “I was personally treated with hostility twice for reasons none other than I was wearing a kippah and wasn’t standing to cheer with the crowd. That is not okay.”

The photo of a student, who wrote an article critiquing a 2017 talk by Thomas Suarez, author of State of Terror: How Terrorism Created the State of Israel, in the UMass newspaper the Collegian, was put on a Power-Point and the student was “belittled” by the organizer at another event, “Exploiting Antisemitism: How False Claims of Antisemitism are Used to Silence Critique of Israel.”

“That is not okay,” Fine reiterated.

While Fine did not mention the name of the organizer of both BDS events, he was referring to Sut Jhally, a UMass professor and chair of the school’s Department of Communication, as well as founder and executive director of Media Education Foundation, which has made films such as “Peace, Propaganda & the Promised Land: U.S. Media and the Israel/Palestinan Conflict” and “The Occupation of the American Mind.”

At press time, Jhally did not return phone calls or email from the Jewish Ledger seeking comment.

Noam Borensztajn, a UMass sophomore, told the crowd at “End Polarization; Promote Peace” that he had written about the Israeli-Palestinian conflict in his college essay and was hoping that as a UMass student he and students from other backgrounds would be able to come together to learn about each other and “create a more diverse understanding of the conflict.”

“I’ve been on campus for over a year now and these conversations have yet to happen,” he said. “The campuses’ environment surrounding the conflict actively discourages people from learning to respect one another. I now realize that college is not a place that freely hands you the opportunity to forge meaningful bonds, but is a place where you have to create those opportunities yourself. It’s up to us to shape an environment where we can come together to discuss the difficult issues and recognize the humanity in all of us. I hope that this event is the beginning of a new conversation on campus, one that strives to make a safe community for every individual on campus and ensures that hate genuinely has no home at UMass.”

Noam’s mother Marcia drove her younger daughter from their home in West Roxbury to Amherst to attend the End Polarization event.

“It’s so great to see him understand the importance and the value of speaking up and speaking for all of the values that mean so much to him and to us as a Jewish community,” she said. “I’m sorry it’s under these circumstances because we want obviously for everyone to be able to discuss difficult issues in a peaceful and respectful way, and that’s the goal here. I’m think his involvement in a program that encourages a sophisticated understanding of the conflict, and that understands that there is humanity in everyone and that there are reasons why this conflict is so difficult and very complicated is so critically important, especially at a university where it is all about critical thinking.”

Rachel Ellis, a UMass junior, reminded everyone that while they were at the Newman Center promoting peace, many Israelis were racing to safety in bomb shelters.

“This morning over 160 rockets were fired from Gaza into Israel reaching as far as Tel Aviv. Civilians in Israel are at risk every day of not only losing their lives but also losing their statehood,” Ellis said.

“Today the Jewish nation is not just under attack in its region but is under attack here in the United States. Although rockets have not been fired, speech detailing the destruction of Israel constantly circulates college campuses in classrooms, through events and through student groups. Some may attribute this to academic freedom, but is it truly free if only one narrative is presented?”

Several participants mentioned their appreciation for an opinion piece written before this pro-BDS panel by Chancellor Subbaswamy, who noted that “… while UMass Amherst is firmly committed to the principles of free speech and academic freedom, the University remains firmly opposed to BDS and to academic boycotts of any kind. Academic boycotts are antithetical to academic freedom and it is ironic that individuals, who rely upon that very freedom to make their case, should advocate for a movement, in BDS, that seeks to suppress it.

“A panel discussion where only one perspective is shared does little to increase the understanding of such a complex topic like the Israeli-Palestinian conflict,” Subbaswamy wrote. “We must step outside our own echo-chambers and encourage the free exchange of ideas.”

More than 121 UMass faculty members sent an open letter to Subbaswamy citing their “deep disappointment and dismay” about his statement and that it “falls far short of the robust defense of academic freedom, and the integrity of the campus community, that we expect of our chancellor.”

But while these faculty members claim a devotion to academic freedom and “the integrity of the campus community” – and while those on the pro-BDS panel claim an attack on that movement and its free speech, several Jewish students at UMass said that they, in fact, feel under attack on the UMass campus for their support of Israel.

When UMass senior Tahlee Yichye learned about the “Criminalizing Dissent” event, she wrote a letter to the editor of the UMass student newspaper, the Daily Collegian.

“The letter in general was just about the climate on campus and how I, as an Arab-Israeli-Jewish woman on this campus, felt being a student here, and how I felt not welcome in certain spaces,” Yichye said. “As a student I felt coming to college was a chance to gain new perspectives and meet new people from different backgrounds, and my background was not welcome on campus and my identity was not welcome here. So [my letter] was talking about that and also the BDS event – why I don’t think it is promoting the things it claims to be promoting.”

“They printed an oped in favor of the BDS event, but my oped was not published,” she said. “This campus has become very polarized in my four years here and it’s a shame. I think campus is supposed to be a place for open dialogue, open communication. By marching and saying, ‘We are here; we have a presence’ – that reminds people that there is another voice and that it should be heard.”