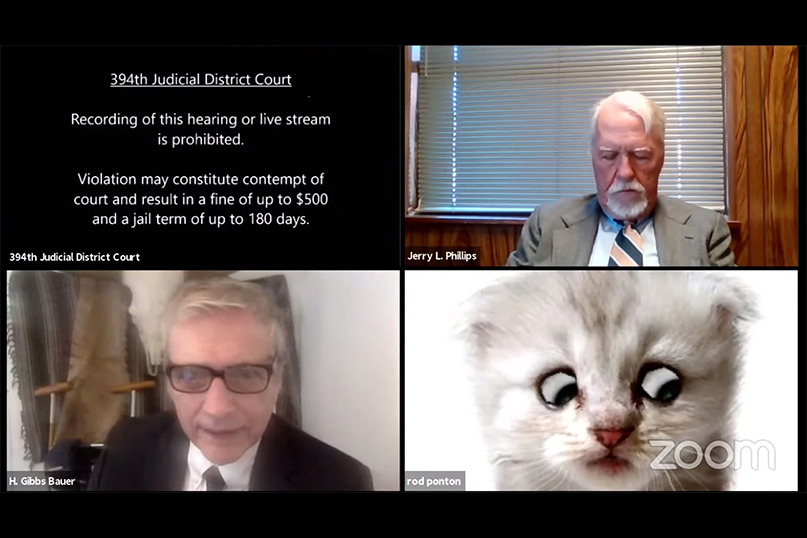 (JTA) — Rod Ponton, a small-town attorney from Texas, captured America’s attention this week after he showed up to a virtual courtroom looking like a fluffy white cat, thanks to a Zoom filter he couldn’t figure out how to disable.

It wasn’t the first time Ponton has made the national news.

In 2014, he drew notice over his involvement in an unusual drug case against a local businesswoman who at one point was released from jail only after promising not to say she was being persecuted because she was Jewish — and who said Ponton had targeted her because years earlier she had ended a sexual relationship with him.

The strange saga of Ilana Lipsen and her Purple House smoke shop was detailed in news coverage in 2014, the year that Ponton, then the district attorney of Presidio County, coordinated a raid on the store with federal drug authorities. Local police also had raided the shop three times two years earlier.

According to a lengthy feature in the Texas Observer, Lipsen attended Jewish school in her Houston suburb before moving to Alpine, Texas, because the local college had an equine studies program. Soon she was running a smoke shop advertising an edgy but then-legal set of products for the town’s 6,000 residents — and facing resistance from those who didn’t want to see that kind of business thrive.

“You either love me or you hate me,” Lipsen told Reason, a libertarian magazine, that year. “I’ve received anti-Semitic hate emails. I’ve been told to ‘go back to Jew York.’”

A multiyear campaign ensued, culminating in a dramatic raid conducted by federal Drug Enforcement Agency officials tied to a nationwide campaign to root out operations meant to launder money to support terrorism. This confused Lipsen, who told the local Big Bend Sentinel that agents had suggested she had terror connections herself.

“They claimed that I had ties with Hezbollah and Syria, which is ridiculous,” she told the paper, according to contemporaneous coverage in Texas Monthly. “How can I, a Jewish woman who supports the State of Israel, contribute to those groups or states?”

Lipsen told the local news media that she feared she was being targeted because she was Jewish and unusual in other ways in the west Texas city. The area has no organized Jewish life, although some Jews are among the artists to have set up shop about 30 minutes down the highway in the city of Marfa. The longtime publisher of the Big Bend Sentinel was Jewish, from a family of merchant pioneers who settled in the area. (One local artist builds models of ships that ferried Jewish refugees from Europe to Palestine, and in a tragic story, a Jewish student at the local college was murdered in 2016.)

She spent several days in jail before being presented with an unusual offer, which drew national attention because of its chilling effect on Lipsen’s right to free speech. She could be released on bond if she agreed to several conditions outlined in a handwritten addendum to the typical paperwork. Among them: Lipsen would have to agree to recant her earlier statements to the press. The addendum said Lipsen “will advise newspaper a warrant was not executed at her business because she was Jewish.”

Why would Ponton have pursued Lipsen and her business so forcefully? He said at the time that he was certain that she was selling illegal substances that put local residents in danger, though he reportedly had difficulty getting approval for testing that would have confirmed the drugs were illegal and the charges she ultimately faced did not center on drug possession. (Her lawyer noted that the drugs in question were made illegal only after the first set of raids.)

Lipsen had another theory. She told Reason that she had had a brief sexual relationship with Ponton years earlier, when she was an 18-year-old college student new to town and hoping to work with the Arabian horses he kept. She said she believed Ponton was targeting her because she declined to continue the relationship. (Ponton denied the allegation.)

Anthony Fisher, the journalist who wrote the Reason story, called attention to it Tuesday night on Twitter, where many people said they were charmed by Ponton’s response to realizing he had reported to court looking like a cat.

Fischer recounted, “I went down to Texas, where Ponton said he would give me an interview before reneging. But it was a small town and everyone knew what happened.”

Lipsen left Alpine, according to reporting from the time. (The Jewish Telegraphic Agency was unable to reach Lipsen this week.) Ponton remained and, in 2016, lost the Democratic primary for another term as Presidio County district attorney. He later became Alpine’s city attorney.

Last year, the city fired Ponton — in part, it seems, because he complained that local police were too often arresting people without cause.

Main Photo: Lawyer Rod Ponton logged onto a case hearing in a Zoom filter seen in the bottom right. (Screenshot)