SECAUCUS, N.J. – This year, even the ticket agent in Manhattan’s Port Authority Bus Terminal knew about Kosherfest – and that the 320 bus, leaving from gate 231, takes visitors to the annual kosher food trade show at the Meadowlands Exposition Center in Secaucus, N.J. Attendees at the world’s largest kosher-certified products show, now in its 25th year, include restaurant owners and caterers, ingredient buyers, representatives of specialty stores and supermarket chains, chefs, hashgacha agencies – even the secretary general of Parma, promoting Italian companies with kosher certification. And they come from such countries as Argentina, Australia, South Africa, New Zealand, Thailand and Israel.

Kosher has no doubt come a very long way. There are now more than 200,000 kosher certified products, and mashgichim (kosher supervisors) routinely travel to such places as Thailand, China, India and Costa Rica to provide certification to fish, spices, raw ingredients and more. Menachem Lubinsky, the founder of Kosherfest, who co-produces the show with Diversified Business Communications, reports, “There was somewhat of a vision back then that perhaps kosher could be more than a certification; that it would emerge as a cuisine. Incredibly, kosher has reached that level and it is still rising.”

The large exhibition hall at the two-day event, held at the end of October, is always bustling – from shacharit through closing. It is the sight and sound of kosher in action, including caterers in search of a new dessert or pareve gelato, new products in search of a distributor, buyers seeking the best price, nearly ongoing mincha services, and an abundance of new and old, milchig (dairy) and fleishig (meat), “healthy” and “less healthy” products to sample. While the show is limited to those “in the trade,” and while samples are only supposed to be consumed on the premises, more than a few visitors were observed bringing samples home.

“Who would have believed that sushi would become a basic staple in restaurant, pizza parlors, and at catered events, or for that matter that nearly 20% of the show would tout gluten-free products?” says Lubinsky.

Attendees with Connecticut connections included Sherrie Krupnick of Danbury, founder and CEO of Sherrie’s Specialties (all natural gluten free and sugar-free baked goods for Passover and all year), Scott Gantwerker of Ridgefield, executive vice president at Foodman, LLC, makers of Matzolah, “The Trail Mix of the Exodus,” and food developer and blogger (MuchAdoAboutStuffing.com), Elise Meyer.

At least two Greek yogurt companies were in attendance: Norman’s Chalav Yisrael and Mehadrin All Natural Nonfat yogurt. Atlantic Natural Foods of Nashville, N.C. displayed “out of the can” vegetarian products with a three-year shelf life, including fishless tuna, five bean chili, vegetarian taco filling and chik’n sliders and patties – with the slogan “lean, green protein – vegetarian food for meat lovers, tree huggers and everyone else.” Although these products are not yet available in this region.

Another healthy product on display was Tivall (“It looks like meat, it tastes like meat, but it’s healthier and it’s pareve”), distributed by Bagel Bites. Their booth offered an abundance of samples of veggie schnitzel, corn bites, grilled filet, empanadas, felafel balls, and hot dogs.

Syndian Natural Foods looked just as tasty and healthy, but arrived with empty hands. Business development manager, Karen D’Angola of Australia said she hopes to come next year with samples of her dual certified kosher/halal all natural, gluten-free, vegan, products which include lentil burgers, brown rice and vegetable burgers and curried pumpkin bites.

New hot drinks of interest included Cuppa J, with its line of pareve hot chocolates. Their three flavors include double dark, mystic mint and Mayan mist. “I like hot chocolate, and there are none which are pareve – and I have a niece and nephew who are lactose intolerant,” says owner Jay Hill, explaining the genesis of the company he launched a year and a half ago. Hill plans to introduce a sugarless line next year.

Danny Ilgiyayev of Café Tastle USA was happy to give a thorough explanation of each of his instant coffees, including the difference between spray dried and freeze dried beans. One passerby, sampling his platinum espresso, commented, “You make it better than my wife!”

Yochanon Kitnick from Fallsburg Bagels and Bakery was on hand, offering samples of his delicious “thaw and serve” donuts. Simply 7 had a big display of its many chips including quinoa, bbq, cheddar, and pomegranate chips. Gourmet to Go of Ramat Gan, Israel displayed a wide range of long shelf-stable meals, including Bukhkara Stew, Mediterranean Shakshuka, Veggie Sichuan, Homemade Couscous and more. And Pizza cones consistently featured the longest lines at the show. Pizza cones are just as the name suggests – pizza (with various toppings!) – served in a cone that closely resembles an ice cream cone.

The most intriguing product of the show, by far, was Kosher Diapers, which feature Velcro over tape and are intended for Sabbath observers.

There was no shortage of baked goods at Kosherfest. Leah Hadad, president of Voila Hallah, wants her customers to “reconnect with the art of baking bread at home.” Toward that end, she offers Wholey Wheat, Traditional and Simply Spelt mixes which taste “just like from scratch.”

Busy with a book tour, pastry chef Paula Shoyer and author of The Holiday Kosher Baker, stopped by the show for a day. Shoyer continues to give baking demonstrations around the world – one recent show was in Hong Kong – as well as across the United States. Shoyer is also a favorite at Camp Ramah in Palmer, Mass. According to Camp Ramah’s assistant director, Josh Edelglass, “Paula Shoyer is a spectacular chef and one of our most popular visiting specialists. Each summer, she spends a week at camp, working intensely with a group of our older campers who sign up for her kosher cooking course. After a week working with her, our kids become amazing chefs in their own right!”

Howard Blas is a freelance writer living in New York. 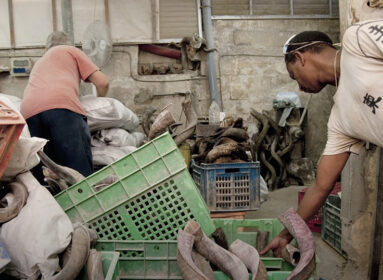