Every summer since 1969, the Dr. Bessie F. Lawrence International Summer Science Institute (ISSI) brings together young scientists from all over the world to experience the challenges and rewards of scientific research at the Weizmann Institute of Science in Rehovot, Israel.

Among this summer’s participants were budding scientists and rising college freshmen Aulden Foltz of Wilton and Eva Gerber of Woodbridge.

Foltz and Gerber joined 25 teens from the U.S. and 80 from around the world who were selected for the program, which accepts only one in five applicants and provides full scholarships to all participants. ISSI affords students – Jewish and non-Jewish – the opportunity to conduct research alongside world-renowned scientists at one of the world’s leading scientific research institutions.

During the month-long program, the students spend the first three weeks conducting research in the campus labs. The work combines the exploration of problems in the fields of biology, chemistry, physics, and mathematical and computer science, and instruction in the use of sophisticated lab equipment such as electron microscopes, advanced computers, a high-energy particle accelerator, and lasers.

But it’s not all work – there are lectures by senior Weizmann Institute scientists, departmental talks, and visits to some of the state-of-the-art facilities on campus. After three weeks on campus, the group moves to an altogether different scientific focus: a field school in the Judean and Negev deserts. Expert guides from the Sde Boker field school lead hikes that acquaint the students with the unique ecological, geographical, geological, zoological, and archaeological characteristics of the area – some of which are one-of-a-kind in the world.

Foltz, a graduate of the Lawrenceville School in New Jersey, will enter Stanford University this month. Gerber graduated from the Jewish High School of Connecticut this year and is a freshman at Yale College.

Foltz learned of the fellowship from a summer camp friend, who posted on Facebook about her own experience in the program.

“I wasn’t originally going to apply to any programs for the summer, but I clicked the link she attached and ISSI just seemed perfect,” Foltz recalls. “I didn’t know such programs even existed, where you not only get involved in real research, but you also get to travel. Well, I had the time of my life, and have sent that Facebook friend countless ‘thank you’ messages since returning.”

Woodbridge resident Eva Gerber has been engaged in the Jewish community as a member of Congregation Beth El-Keser Israel in New Haven, where she is a bar/bat mitzvah tutor and member of the youth group. She heard about ISSI from her college counselor.

“It seemed like a great opportunity to spend time in a lab and visit Israel,” she says. “I was really excited to work in a world-class laboratory and to learn from brilliant researchers.”

Foltz worked in the neurobiology department in the area of psychophysics, the study of the relationships between stimuli and the sensations and perceptions evoked. Gerber was placed in Prof. Idit Shachar’s immunology lab and mentored by Lihi Radomir, a PhD student engaged in an immunobiology project.

Foltz didn’t know what to expect at Weizmann.

“I hoped mainly to make new friends and learn more about Israel, and I did that, but I also did so much more,” she says. “My lab partners and I learned to craft a project from scratch on a topic which we knew nothing about beforehand. I learned how to have conversations with people about topics they knew far, far more about than I did and how to benefit from their passion and expertise. I learned how to both hike an hour up a steep incline – stairs, pretty much – and prepare a research presentation while living on less than three hours of sleep. And hopefully, as this is still a work in progress, I will learn how to keep in touch with some really amazing friends even though they live thousands of miles away.”

Foltz and her fellow team-members worked mostly on project design and coding, often wrestling for hours over code before breaking for lunch with no resolution in sight.

“I don’t know if it was just taking a mental break or if there was something magical in the schnitzel, but we would all of a sudden have a ‘eureka’ moment during lunch and the problem we were working on for hours would be resolved minutes after we returned to the lab,” she says.

In the lab, Gerber learned new scientific techniques and gained a greater appreciation for the day-to-day life of an immunology researcher.

“I didn’t anticipate learning so much about different cultures or forging such strong friendships,” she says. “I’m so grateful I had this chance to engage in meaningful research, learn more about immunology, meet amazing peers from around the world, and practice my Hebrew!”

ISSI participants are housed on campus in the Martha, Bram, Philippe and Michael Laub International Science Youth Village. “My favorite moments were just spending time with other participants,” Foltz says.

“Any time of day or night, you could go to the common living spaces and people would always be there, ready to open their conversations to you. I loved that.”

Both young scientists were particularly awestruck by the culminating activity, a hiking trip through the Negev Desert. “Not only were the hikes beautiful – and definitely worth waking up at 4:30 AM for – but I got the chance to learn more about computational ecology from incredible researchers from Ben Gurion University of the Negev,” says Gerber.

ISSI was an invaluable experience for the two young women, who were both motivated to stay engaged in scientific study.

“I had done research before, but I had never designed my own experiment; the idea of doing such a thing had always intimidated me,” says Foltz. “This program forced me to overcome that barrier and practice using my own limited knowledge and that of the people around me to test something as mysterious as the human brain. I also loved how Weizmann prioritized research for the sake of science, instead of, say, industry, and this is a prioritization I hope to carry with me throughout my scientific career.”

CAP: Among the budding scientists at Israel’s Weizmann Institute this summer were Aulden Foltz of Wilton (right, holding flag, with her face covered by someone’s hand) and Eva Gerber (standing, second from left.) 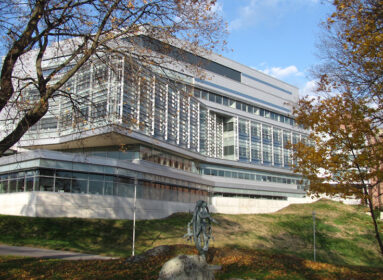 JFACT to lead mission to Cuba