STATEWIDE – Stephen Armstrong has taught the Holocaust at both the high school and college levels.

He has been a social studies teacher in the Manchester and West Hartford public school systems, and still history at Central Connecticut State University. He also serves as social studies education consultant for the Connecticut Department of Education, which gives him a good handle on how the state has presented the topic of Holocaust and genocide to students in the past.

The key word here is “some.” Until recently, the Holocaust and genocide – often difficult subjects to teach children – were not required as part of the curriculum in Connecticut schools.

So, Armstrong was pleased when the Holocaust and Genocide Education and Awareness Act, which mandates that Holocaust and genocide education be taught in Connecticut starting this school year, became law July 1.

Governor Dannel Malloy signed the act into law on July 1, after years of efforts by groups like the Jewish Federation Association of Connecticut (JFACT) and Voices of Hope, a Holocaust education group made up of the children and grandchildren of survivors, to legislate Holocaust education in the public schools.

“It is incredibly disturbing that we have seen an uptick in hate crimes and hate speech over the last year…in nearly every region across our country,” Malloy said upon signing the bill. “Equally as disturbing are recent statistics showing that two-thirds of American millennials don’t know what Auschwitz is and 22 percent of millennials say they haven’t heard of the Holocaust. We are simply not doing enough to teach our young people the extreme and deadly mistakes of the past. Holocaust and genocide awareness are not just essential curriculum, but critical.”

The new law requires that all local and regional boards of education include the topic in their social studies curriculum beginning in the 2018-19 academic year. In developing and implementing the curriculum, the boards can use “existing and appropriate public or private materials, personnel, and other resources.”

Toward that end, a 30-member “autonomous and voluntary” Holocaust and Genocide Advisory Committee was formed by Voices of Hope to help plan and implement the curriculum.

“It is an incredible group of people,” says Anna Huttner, co-director of Voices of Hope. “The majority of them are professors from around the state, with representation from UConn, Yale, the University of Hartford, Southern CT State University, Western CT State University. It is generally the heads of departments of Holocaust, genocide and Human Rights.” 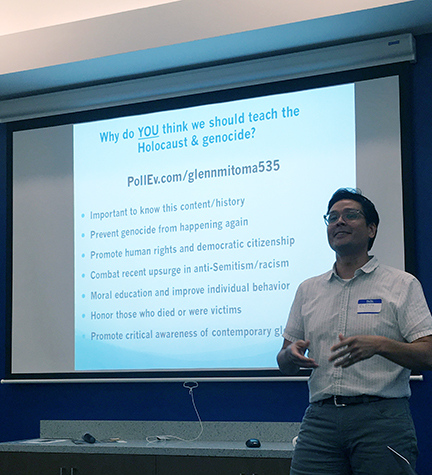 Professor Glenn Mitoma, director of the Thomas J. Dodd Research Center at UConn, helped to facilitate workshops at both UConn and the  University of Hartford.

Members of the advisory committee include Voices of Hope founder Alan Lazowski and his father Rabbi Phillip Lazowski, a Holocaust survivor; Voices of Hope President Peter Fishman; the ADL’s Marji Lipshez-Shapiro; JFACT Executive Director Michael Bloom and President Sydney Perry; and State Rep. Andy Fleischmann, who worked in the legislature to get the law passed. Holocaust and human rights scholars on the committee include Prof. Avinoam Patt, associate director of the University of Hartford’s Maurice Greenberg Center for Judaic Studies and director of its Museum of Jewish History; Dr. David Simon, director of Yale University’s Genocide Studies program and its Rwandan Genocide Project; and Glenn Mitoma, director of the Thomas J. Dodd Research Center at UConn.

The scholars in turn formed a subcommittee to develop workshops for Connecticut schoolteachers.

In mid-August, approximately 100 teachers attended “Teaching the Holocaust and Genocide: Meeting the State Mandate,” which were held at four locations around the state.

“We are all working together to provide resources in the form of advice on how to teach it, existing curricula that are already out there that do a good job of teaching this, and providing guidance for the use of resources that are provided by many institutions all over the world,” says Patt.

Patt was a facilitator at the workshop held at the Greenberg Center on August 17, attended by 30 to 35 public school educators. He was joined by Glenn Mitoma of UConn and Stu Abrams, an Avon High School teacher who has taught his students about the Holocaust and genocide for many years.

“The three of us provided an overview of what the Holocaust and genocide are, how these terms are defined and why it is important to teach about it in Connecticut,” Patt says. “[We also wanted to] encourage people to develop empathy and to have respect for the other, to confront indifference, create a culture of diversity, and speak out against discrimination. We are trying to teach our children to become better citizens of the world.”

Because the new law is a bit vague – stating only that it be taught in social studies classes, but not recommending how much time be spent on it or at which grade level – some teachers may not know where to begin.

Stephen Armstrong spoke at each of the workshops.

“As the State Department of Education representative I spoke at all four of the workshops,” he notes. “I described the legislation and answered questions about its implementation. After that, at each workshop scholars and teachers shared strategies and resources for the teaching of the Holocaust and Genocide.”

Each workshop touched on the Holocaust as well as another instance of genocide, such as the near annihilation of the Pequot tribe, the Armenian, Bosnian, Rwandan and Darfur genocides, and the genocide of the Rohingya people of Myanmar.

“The teachers were all interested and enthusiastic about receiving these new resources. Their main complaint was that they wished they had more time,” Patt says. “Teachers who teach these classes are usually passionate about it and think it is important. So they seek out opportunities to really try to do it the best they can. What is encouraging about the state’s passage of the legislation is that the Department of Education is going to be very helpful in providing resources and reaching out to teachers and using their network to share the resources that we on the advisory board were able to come up with and provide for teachers.”

Voices of Hope and the Department of Education are also working on a series of five webinars that are expected to soon be available to educators around the state and will provide them with related resources and information.

The Holocaust Education law states that school boards can accept gifts, grants, and donations to pay for any resources they use, which will come in handy given that the law’s supporters promised the legislature that there would be little or no cost to the state.

“One important variable was assuring legislators that this would be a revenue-neutral proposition so it wouldn’t cost the state anything extra,” says Patt. “The promise was essentially that other groups, like institutions of higher education and Voices of Hope would come together to provide resources that the state wouldn’t be able to provide.”

To help make good on that promise, Voices of Hope is committed to funding the curriculum.

“We are raising funds,” says Huttner. “We have already provided books for classes. We’ve hired people to create a curriculum for both the Holocaust and Pequot War. We have also hired people to create resource sets of usable online materials as well as community resources that are available to them either for free, or the cost of which is being covered by Voices of Hope.”

To help raise money, on Oct. 10 Voices of Hope will hold its annual “Evening of Hope” fundraiser at the G. Fox Ballroom in Hartford, featuring “Violins of Hope,” a performance by Niv Ashkenazi, who will perform on a “Strings of the Holocaust” violin – a restored violin that was played by a Jewish musician during the Holocaust.

Avi Patt and Dr. Joe Olzacki – both of whom helped to get the law pass – will be honored with the Simon Konover Recognition for Excellence in Holocaust Teaching, named for the late Hartford businessman and philanthropist and Holocaust survivor. Patt is also being honored for his help in creating the Holocaust Education Resource and Outreach Center, a joint initiative of the Greenberg Center and Voices of Hope, which will provide testimonies from Holocaust survivors to students around the state.

Also that evening, Matt and Elysha Dicks of the organization “Speak Up” will be recognized with Voices of Hope’s L’Dor V’Dor award for their work training the descendants of survivors to tell their stories.

“I’m very grateful,” Patt says about his Voices of Hope honor. “I’m excited about this partnership and what we have been able to develop. We have just begun to lay a foundation to provide Holocaust and genocide education in the state, but clearly we know why it is so important for us to do that now with the passage of legislation, the political climate we are in, and the passing of the survivor generation – all of these things mean the timing is critical. We are just at the beginning in terms of all of the work that needs to be done. It is clear that this is work that is going to continue for many years. I’m excited but aware of the enormity of the task that lies before us.”

For more information regarding the Voices of Hope gala, visit info@ctvoicesofhope.org or call (860) 470-5590.

Al Franken learned about justice from his childhood rabbi 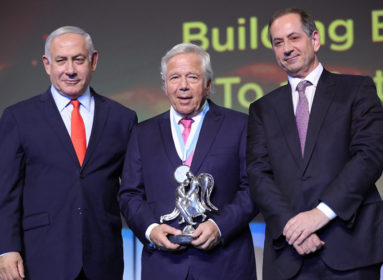