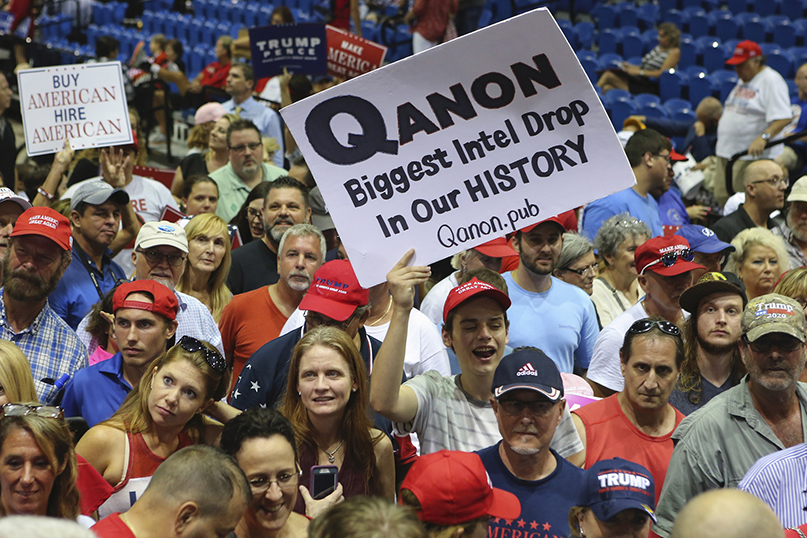 (JTA) – Months after beginning to remove QAnon content discussing violence, Facebook and Instagram are now removing all pages and accounts representing the pro-Donald Trump conspiracy theory with antisemitic overtones. QAnon is a false but growing conspiracy theory that alleges that a cabal of liberal, globalist elites sexually abuses children and harvests their blood, and wants to take down Trump. It has been endorsed by Republican candidates for Congress, and Trump has declined to condemn it. Officials say that it is also influencing voters ahead of next month’s election. Scholars of antisemitism say the conspiracy theory is a new version of age-old antisemitic stereotypes regarding Jewish conspiratorial control of world affairs. They also say it echoes the blood libel, the antisemitic conspiracy theory claiming that Jews use the blood of non-Jewish children for ritual purposes.

Facebook first took action against QAnon in August, when it began removing 1,500 QAnon pages and groups that discussed violence. Now, it will remove all QAnon content, even if it doesn’t explicitly refer to violence. In August, before Facebook began taking action against QAnon, its affiliated groups had millions of members on Facebook, according to NBC. Its content is often created and spread by its adherents, which means that it has subsumed other conspiracy theories and expanded in scope as it has attracted more followers.

“While we’ve removed QAnon content that celebrates and supports violence, we’ve seen other QAnon content tied to different forms of real world harm,” Facebook said in a statement. “Additionally, QAnon messaging changes very quickly and we see networks of supporters build an audience with one message and then quickly pivot to another.”

The action by Facebook comes after a summer in which a coalition of civil rights groups, including the Anti-Defamation League, led an advertising boycott of Facebook to protest what they called its failure to adequately combat hate speech.

Main Photo: Trump supporters display QAnon posters at a 2018 rally in Florida. Recently, Latinos in the state have been inundated with anti-Semitic messages, many relating to the false QAnon conspiracy theory. (Thomas O’Neill/NurPhoto via Getty Images)